The Lagos State Police Command has confirmed the killing of a Lagos lawyer, Bolanle Reheem, in Ajah, Ibeji-Lekki Local Government Area of the state, on Christmas Day.

The DEFENDER reports that the incident came into the public space via social media as one “The Juggernaut Esq” @KcUzoka, apparently a lawyer, posted on his personal Twitter handle attracting the attention of Benjamin Hundeyin, a Superintendent of Police (SP) and the state Police Public Relations Officer (PPRO), to lodge a complaint about the killing Sunday evening.

He said, “Good evening @BenHundeyin, one of your officers attached to Ajiwe police Division Ajah, shot at point blank & murdered a lawyer colleague of mine today. This is one too many of similar incidents with @PoliceNG officer in Ajiwe. Now a family have lost a dear one on Christmas day.”
The officer involved in the killing, an unnamed Assistant Superintendent of Police (ASP), and his team were said to have tried to stop Barrister Raheem and her family members as they drove back home from a Christmas Day church service.

It was gathered, further, that she was shot when the car carrying her tried to make a u-turn under the Ajah Bridge and was rushed to a nearby hospital where she was confirmed dead.

Responding to the tweet on Monday, the Command’s Spokesman, SP Hundeyin, confirmed the incident saying, “Unfortunate and avoidable incident that was. The ASP that shot and two others with him have since been taken into custody. They are to be moved to the SCID for further investigation.”

Assuring the public that justice will prevail, Hundeyin said, “The Lagos State Police Command condoles with the family, friends and colleagues of Barrister Bolanle Raheem.

“The Commissioner of Police, Lagos State Command, CP Abiodun Alabi, has been in touch with the family and the Nigerian Bar Association since yesterday and has given firm assurances that justice will definitely prevail.

“We are not handling this with levity. The Nigerian Bar Association just concluded a fact finding visit to the Divisional Police Officer (DPO) Ajah.

“The Commissioner of Police, Lagos State Command, CP Abiodun Alabi, fdc equally met with the Nigerian Bar Association in his office today. Justice will prevail, we can assure,” the Lagos PPRO saidi in his series of tweets on Monday. 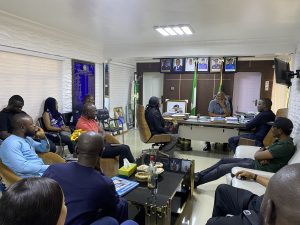 NBA members in a meeting with Lagos State Commissioner of Police, over the killing by cop of one of their members, Bolanle Raheem, on Monday December 26, 2022.

In the meantime, the Inspector-General of Police (IGP), IGP Usman  Alkali Baba, has condemned the shooting and killing of Raheem.

The IGP, who described the incident as unfortunate and sad, ordered speedy investigation and prosecution of the officers responsible for the ugly and unprofessional act, Force Public Relations Officer, CSP Olumuyiwa Adejobi, said in a statement issued in Abuja.

IGP Baba, who apparently saw the development as appalling considering the much he has put into ensuring a professional and civil policing system in the country, said the act does not portray the Nigeria Police Standard Operating Procedure and core values.

“In the same vein, the IGP commiserates with the family, friends, and colleagues of the deceased as he prays for the repose of her soul.

“He further assures the general public of justice in the case while he warns officers and men of the Force to be professional and people-oriented in the discharge of their duties and operate within the ambit of the law, as the Force’s leadership will not condone any inappropriate or unprofessional acts,” the statement read.

Furtherance to the efforts so far, the Nigerian Bar Association (NBA), speaking through its National Publicity Secretary, Akorede Lawal, has demanded that justice be served on the matter.

“We are aware of this unfortunate incident. This is yet another crime against a lawyer. Regrettably, our member is gone…We shall ensure that justice is duly served,” Lawal said.