Google has been condemned by a US anti-Semitism watchdog for bringing users to a dictionary entry describing ‘Jew’ as a verb meaning “to bargain with someone in a miserly or petty way.”

Users searching for the word on Tuesday were shown the offensive dictionary entry, with the more traditional entry for the word – a noun describing “a member of the people and cultural community whose traditional religion is Judaism and who trace their origins through the Hebrew people of Israel to Abraham” – shown further down. 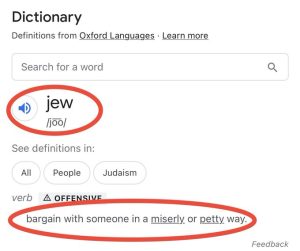 When one enters “jew” into the Google search engine, a grotesque antisemitic trope comes up. This is in unacceptable
@Google – StopAntisemitism @StopAntisemites

A note above the definition highlighted the fact that it was considered “offensive.”

“I couldn’t believe it so I googled it myself,” Israeli Foreign Ministry spokesman Elad Strohmayer tweeted. 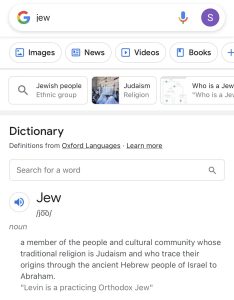 Google had not yet addressed the controversy by Tuesday evening. However, the tech giant itself was likely not responsible for the definition. Google’s website explains that it “doesn’t create, write, or modify definitions,” which are drawn from “third-party experts who compile dictionaries.”

“Our partners label these terms as vulgar, derogatory, or otherwise offensive to provide proper context about them,” the website continued. “We only display an offensive definition by default when it’s the main meaning of the term.”

The offensive definition was not showing up as of Tuesday evening, having been replaced by the traditional entry.