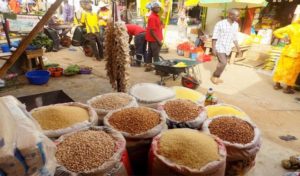 The Federal Government says it is considering holding a public debate in order to establish commodity pricing board by 2017.

The Minister of Agriculture and Rural Development, Chief Audu Ogbeh, disclosed this at a press conference in Abuja on Monday.

Ogbeh, who expressed regret that commodity pricing boards which were established few years ago were no longer functional, said the public debate would help to tackle gaps experienced by the past boards.

He explained that a minimum guaranteed price for crops was necessary to ensure balance for consumers.

“Commodity boards were set up before but somehow, they did not work.

“The debate now is that, do we go back to the commodity boards or not, but we will arrive at something soon.

“We may have to hold a public hearing on this matter. There are those who said that there were abuses.

“Some people were of the view that farmers were cheated, while others said the system worked well because they guaranteed quality control, educated farmers on what to do.

“The views are very strong on either side, we intend to hold a public debate quickly, analyse them what we have and see what is best.

“Give us a little time, maybe, early next year, we will find a solution to that. We have a duty to protect the Nigerian consumers,’’ he said.