*Says Sarikin Kano’s closeness to Tinubu, others can mean 2019 conspiracy against the government

A Kano State based pro-democracy group, Coalition for Democratic Norms (CODEM), has cautioned the Emir of Kano, Alhaji Muhammadu Sanusi II, to desist from his incessant attacks on the government of President Muhammadu Buhari to avoid unnecessary consequences.

The group, in a statement jointly signed by Balla Abbe Kazaure and Usman Dan Numa Gazkiya, National Coordinator and General Secretary respectively was of the view that, “Emir Sanusi, going by his position must have had several open channels to get to the presidency to ventilate his ideas on economy than attacking the seat of power openly.”

According to the group, the Emir seemed not to have learned from history that whoever lives in a glass house should not throw stone, asserting that, “no emirship has the capacity to defend any glass house when the act of throwing stones boomerangs.”

Though the group agreed that everybody has the right to advise or criticise the government, it however warned that it was not when such a person is vulnerable.

Going down the memory lanes, the group wrote: “As it is, the position of an emir is too vulnerable to guarantee the comfort of public commentary, especially making a career out of acerbic take on government policies.

“Powerful traditional rulers like Sultan Dasuki and Emir Jokolo were all stripped of their titles in ONE day; no processes, nothing. That’s how ‘useless’ the traditional authority is in our present arrangement.

“Emir Sanusi’s own grandfather was only casually invited to Kaduna in 1963. On arriving the governor’s office, Sir Kashim Ibrahim drew out a prepared letter of resignation alongside the report of DJM Muffet report of inquiry into Kano Native Authority finances, he was advised to sign the letter. He did.

“He went into the office as an Emir with all the paraphernalia and emerged out of it as a “retired” Emir. He was immediately exiled to Azare, in present day Bauchi State.”

Emir Sanusi was reminded in the statement that, “he was the  CBN governor only recently,” stating that, “if the government wants, it  could get proverbially a thousand and one things to use against him.”

The concerned group cited issues of  Financial Reporting Council report, Forex Management under him as well as  bailout for banks as examples.

“It is like the case of someone in the glass house and the emirship can’t fortify that glass house,” warning that, “emir’s closeness to Bola Tinubu, Bukola Saraki and Nasir el-Rufai can be miscontrued to mean conspiracy against the government towards 2019.” 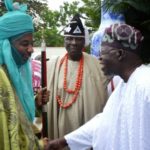 CODEM: Emir Sanusi’s closeness to Bola Tinubu, Bukola Saraki, Nasir el-Rufai can be misconstrued to mean conspiracy against the government towards 2019.