*No evidence Fayose was slapped, humiliated by Police

*’Rivers’ Wike must apologise to Nigerians, Media for misleading them’

To the PDP and its presidential aspirant Atiku Abubakar, the respondent said he was not surprised as, according to him, “It is the stock in trade of that umbrella to react to fake news.  That was one of major reasons they lost power and have lost it for good in this country.  Ask me why? They talk before they think.”

Emerging details of the incident in Ekiti State on Wednesday have continued to unfold with eye witness account saying the incidents have two phases, one which has to do with drivers who took to violence when Governor Ayodele Fayose failed to settle them with the N10,000 each he promised them if they would agree to bring their commercial vehicles to the Government House and not work for the Tuesday that President Muhammadu Buhari would visit the state. 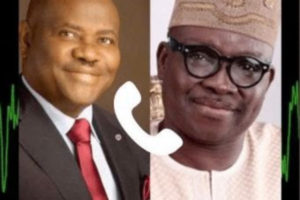 The other phase of the incident, it was gathered, was that of some party supporters who wanted to force themselves through police mounted security at flashpoints to do political rally after the police had stopped political rallies except with express permit.  But on hearing that they were not allowed into the venue, Governor Fayose, we learned, decided to lead them without regard to the effort being made by the police to ensure peaceful election in the state which included the mounting of security surveillance in trouble areas across the state.

On the first account, it was said that failure of the governor to settle the drivers he called to park their vehicles in the Government House to cause traffic difficulty for APC members during their mega rally Tuesday had sparked violence between the drivers and the governor’s aides.

One of the drivers union leaders, Kamoru Ojuolape, who stormed the Government House this morning (Wednesday) to demand for the money promised them, said they were angry because the governor failed to pay them N10,000 he promised them for parking their vehicles overnight in order to disrupt transportation system to hurt APC rally.

He said the drivers became unruly when they discovered that some parts of their vehicles had been stolen.

Requests to see the governor were turned down while some of the aides of the governor blasted the drivers who responded by throwing punches.

Some of the governor’s aides joined the fray, which further drew the anger of other drivers.

Minutes later, the picture of the governor who was nowhere near the scene appeared on social media that he was tear gased by the police.

The police have invited the leaders of the drivers to the police headquarters to settle the matter and that settled the phase one of the incident.

Phase two, our checks further learned, shortly after the issue that happened in front of the Government House between the unpaid thereby angry drivers and the governor’s aides, Fayose appeared with neck collar on television claiming that the police wanted to kill him over Saturday election.

Against the misrepresenting reports already being bought by the scripted stories as told by Governor Fayose who is the only one that knew how it happened and how he was purportedly slapped, beating and teargased, our checks can confirm that while it was true that the police did not allow the governor to successfully lead the unpermitted political rally, there is no evidence that we have to show that the police slapped, beat and humiliated the governor as he had made people including media men, who failed to ask him questions about his claims, to believe.

Our checks can however confirm that, like we reported earlier Wednesday, that those supporters were dispersed with tear gas to discourage them from gaining entrance into the particularly centre for the unpermitted rally.

But unreliable feeders are saying that Fayose’s effort to again lead the supporters to go ahead with the rally with a view to compromising the mounted security led to argument and which resulted to shooting of tear gas causing the governor, and nobody else, to suffocate.

The DEFENDER has no evidence that Fayose, like Senator Dino Melaye, is an asthma patient but there is evidence that the two cases of the governor and the senator are scripted with the same structure; syntax and semantics.

In the meantime, the Deputy Inspector-General of Police (DIG) in charge of Operations, Mr. Habila Joshak, who is on ground in the state to ensure compliance to law and order for the success of Saturday election, denied blocking the entrance of the Government House as tweeted by Fayose, saying only the road from Fajuyi to the state secretariat was blocked.

DIG Joshak made it clear, however, that no rally would be allowed any more in the state unless expressly approved by the police.

“But we are not going to allow any unauthorised rally that can trigger violence in the state. You can see that the state is tensed up.

“As law enforcement agent, we must be proactive and take actions that can prevent crisis rather than trying to quell it after it might have broken out.”

In the meantime, Rivers State Governor Nyesom Wike, has been called upon to as a matter of urgency tender unreserved apology to the Nigerian people and the Nigerian Media that he gathered to a press conference late Wednesday where he fed them with fake briefing without properly finding out what happened in Ekiti before jumping to conclusion.

A respondent who spoke to The DEFENDER Wednesday night demanded that the governor “as a matter of urgency tender apology to Nigerians for attempting to further heat up the already heated polity with his fake misinformation over the Ekiti State fathomed attacks on his ‘Junior Brother Fayose’ and thereby inciting Nigerians against the Muhammadu Buhari government, APC, the Nigerian Police and INEC,” he said.

To the PDP and its presidential aspirant Atiku Abubakar, the respondent said he was not surprised as, according to him, “It is the stock in trade of that umbrella to react to fake news.  That was one of major reasons they lost power and have lost it for good in this country.  Ask me why? They talk before they think.”