*I’ve been following The DEFENDER, it is doing well – NDLEA Boss

He (Hadejia) told the retired Army General that his performance is not only commendable but, more deservedly, requires all that matter to support the NDLEA’s vibrant and proactive leadership and team as, according to the retired police officer, by detecting and arresting big catches including syndicates, who supplied drugs to terrorists and bandits, as witnessed recently, “you and your team are a major factor in the fight against insecurity in Nigeria….” 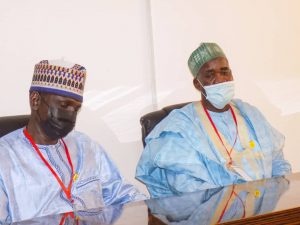 *From Right: President, Advisory Board of The DEFENDER Newspaper, AIG Mu’azu Idris Hadejia (Rtd), and Advisory Board Member, AIG Mohammed Mustafa, during a courtesy visit of Defender Media Limited, publishers of The DEFENDER Newspaper to the NDLEA Chairman/Chief Executive Officer, Brigadier General Mohamed Buba Marwa (Rtd), at the NDLEA Headquarters in Abuja, in Thursday 6th May, 2021.

The former Military Governor of Lagos State, Marwa, stated this while receiving in audience publishers of The DEFENDER at the NDLEA Headquarters in Abuja.

Marwa noted that he had been following the online newspaper’s reports to see that it is doing well for the nation, “the fact that our professional colleagues, security officers in the two AIGs are behind this great media work for the good of Nigeria makes it further more commendable.” 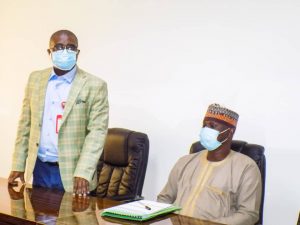 From Left: Director of Media and Advocacy, NDLEA, Mr. Femi Babafemi, and the Director of Intelligence, NDLEA, Mr. Sunday Zirangey, during the visit of Defender Media Limited, publishers of The DEFENDER Newspaper, to the NDLEA Chairman)Chief Executive Officer, Brigadier General Mohamed Buba Marwa (Rtd), at the NDLEA Headquarters in Abuja, on Thursday 6th May, 2021.

Explaining the role of drug abuse in the insecurity that any nation can be afflicted with, especially as currently being witnessed in Nigeria, General Marwa said, “There is nothing that can make somebody go ahead and kill fellow human being if not he is under the influence of drugs.” 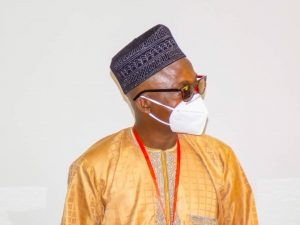 *MD/Editor-in-Chief, Defender Media Limited, publishers of The DEFENDER Newspaper, Prince Bashit Adefaka, during the visit of the media organisation to the NDLEA Chairman/Chief Executive Officer, Brigadier General Mohamed Buba Marwa (Rtd), at the NDLEA Headquarters in Abija, in Thursday 6th May, 2021.

He, therefore, called on the media to collaborate with his agency, saying “we need you in making sure that our country is safe free of drug related criminalities”.

Joining the NDLEA Chairman to receive the visitors were his Director of Media and Advocacy, Mr. Femi Babafemi, and Director of Intelligence, Mr. Sunday Zirangey

Earlier, publishers of The DEFENDER, a publication of Defender Media Limited, led by President of the media organisation’s Advisory Board, AIG Mu’azu Idris Hadejia (Rtd), accompanied by another Board member, AIG Mohammad Mustafa (Rtd) and Prince Bashir Adefaka, told their host “why we are here”. 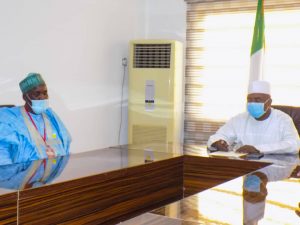 “Although we in the Journalism community are not given to things that would make us look like stooge of government or any of its agencies, any media organisation will agree with us that collaborating with a doing well security agency like NDLEA at this time is one better way to be part of making Nigeria better and, so, we are here to commend you and your team that your performance in the last 100 days in office is more than satisfactory to us,” General Marwa was told by the organisation’s Managing Director/Editor-in-Chief, Prince Bashir Adefaka, while introducing the Hadejia-led delegation. 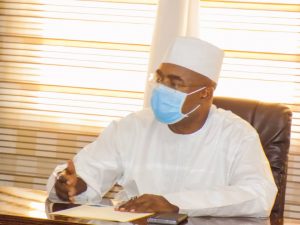 In his remarks before presenting the letter of commdation to General Marwa, The DEFENDER President, AIG Mu’azu Idris Hadejia, a member of the national institute (mni), Member of the Federal Republic (MFR), told the NDLEA boss that “you are known not just now that you are NDLEA boss. Your days as Military Governor of Lagos State will continue to reverberate in the memory of all. When you were governor there, I was AC Works, then I later became DC and CP Works before I was posted to Force Headquarters in Abuja here, where I became AIG Works and, years after, I retired in 2012. So, you are known to us not just today and I must say that you are doing well.”

He told the retired Army General that his performance is not only commendable but, more deservedly, requires all that matter to support the NDLEA’s vibrant and proactive leadership and team as, according to the retired police officer, by detecting and arresting big catches including syndicates, who supplied drugs to terrorists and bandits, as witnessed recently, “you and your team are a major factor in the fight against insecurity in Nigeria, hence we are here to hand over to you today a letter of commendation to that effect,” he said.

In his own comment, AIG Mohammed Mustafa, who is also a member of the National Institute (mni), corroborated the others and said “as my former Military Governor of Borno State, I have known you as a performer for long especially in Lagos. So, we can only call on other stakeholders to show patriotism by supporting the NDLEA under your leadership because, the role of drugs in the problem of our society cannot be underestimated, and the responsibility to curb the menace should be of all,” he said.

The letter commending the agency’s boss, his commanders and staff read in part:

“This is to point out the fact that your energy to excel in any given public and private responsibility for the good of Nigeria is not in doubt, considering how you revolutionized peace, security and development, even as military governor, in the Centre of Excellence and handed over a greater Lagos to the civilian Administration upon return of democracy on May 29, 1999.

“Your appointment by President Muhammadu Buhari in January this year.2021 as Chairman/Chief Executive Officer of NDLEA, therefore, not only provided us to see the Marwa Energy at work once again but also can better be described as round peg in round hole in the quest for achieving a Nigeria free of illicit drugs and drug related businesses, no matter how lucrative and induced crimes, no matter how powerful the people behind them.

“We can say ‘OPERATION SWEEP IS BACK’ (now beyond Lagos) in Nigeria.

“As for us at the Defender Media Limited, like you have seen us collaborating with your Agency by our publication, The DEFENDER, …defending the truth and national integrity! – we make bold to pronounce that you are doing very well fighting the major catalyst giving wings to terrorism, banditry and other criminalities across the country. Therefore, we must and should continue to support you to the best of our information management capacity,” the media Board said in the letter jointly signed by its President and Editor-in-Chief.