The Dean, Bola Ajibola College of Law (BACOLAW), Crescent University, Abeokuta, Nigeria, Prof. Momodu Kassim-Momodu has been appointed by the International Criminal Court  (ICC), The Hague, to serve as a Judge in the ICC International Moot Court Competition 2019.

This was revealed by Public Relations Officer of the Crescent University Abeokuta, Mr. Idris Katib, as captured in a statement sent to The DEFENDER on Friday.

Prof. Kassim-Momodu first served as a Judge of the competing in 2016 following his nomination as a member London Court of International Arbitration.

This time, his chosen affiliation for becoming a Judge of the competition is the prestigious Crescent University, Abeokuta, Nigeria, founded by a one-time Judge of the International Court of Justice (ICJ), Hague,  His Excellency Judge Bola Ajibola.

In a related development,  18 students of Bola Ajibola College of Law of the university have passed their Nigerian Institute of Chartered Arbitrators’ examinations thereby becoming Associate arbitrators before their graduation as lawyers. The dean stressed that “this is the first time this is happening in Nigeria”. 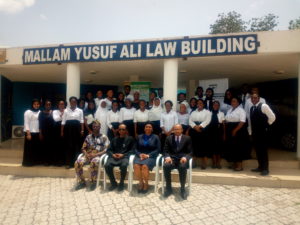 It was gathered that another batch of 35 BACOLAW students would also be taking the arbitration examination this month of May, having completed their training.

Speaking at the Associate Training Programme of NICArb in Abeokuta, Ogun State, recently, the Registrar/Chief Executive, Mrs Shola Oshodi-John stressed that the essence of the training which usually leads to the arbitration examinations was to open the wall of Alternative Dispute Resolution (ADR) to law students and to also give young upcoming lawyers an opportunity to make an informed choice.

Observing that ADR was an added value to undergraduate students to acquire skills to engage people and negotiate, Mrs Oshodi-John said it would bring about easy access to justice in Nigeria where people could develop culture of peaceful resolution of conflict. 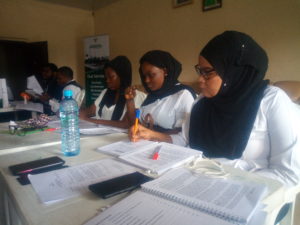 Some of the students during the lecture.