*He was an uncommon leader – Oladele

*An Iroko has fallen – Olawumi

…says Akala died exact date he was sworn in governor

Former Oyo State Commissioner for Information and Orientation, Hon. Bosun Oladele, has described a former Governor of the state, who died in his sleep in the early hours of Wednesday 12 January, 2022, Otunba Christopher Adebayo Alao-Akala, as an uncommon leader.

He said the late All Progressives Congress leader would be missed seriously.

Oladele, who is also a former Member, House of Representatives representing Irepo/Orelope/Olorunsogo Federal Constituency in Oyo State, made his condolence known in a post via his verified Facebook social media timeline picked by The DEFENDER on Thursday.

“His Excellency Otunba Adebayo Alao Akala (Former Governor of Oyo State, Nigeria)!!! Gone too soon…… He will be sorely missed by all, especially the APC family of Oyo State. He was an uncommon leader, always calm, patient and composed even in the face of daunting challenges. Journey well Tiger, omo iya Alaro ’ Omo Oluokun eshin,” Rep Bosun Oladele mourned.

An Iroko has fallen – Lateef Olawumi 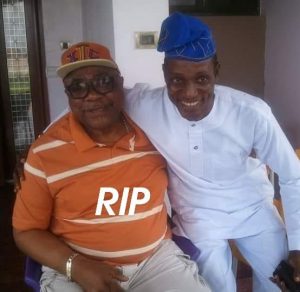 In his own condolence message, House of Representatives Aspirant Lateef Olawumi expressed sadness that the Iroko has fallen.

Olawumi said: “Otunba Christopher Alao Akala, a former governor of Oyo state takes his last breath on the 12th of January, the exact day he was sworn in as the governor of the Pace setter’s state.

“Farewell to a unique being, an history maker, a pace setter in Oyo political history.

“A unique personality with impeccable character. The architect of modern Oyo state who took development to the neglected areas during his era as the number one citizen of the state.

“Late Akala the history maker who was the only governor in the history of Oyo State to have served as a local government chairman, deputy governor and later became governor.

“A grassroots and homely personality and this was displayed during his tenure as the executive governor of Oyo state. Late Akala hardly spent the weekend in Ibadan, but his hometown, Ogbomoso throughout his tenure as governor.

“His death is one too many because of his positive impact and the Nigerians look towards the 2023 General elections, Chief Akala is one of the political gladiators others politicians in the state look up to for guidance for the growth of Oyo state in particular and Nigeria in general.

“His death came exactly a month after the Soun of Ogbomoso, Oba Jimoh Oyewumi Ajagungbade lll joined his ancestors.

“The first in most of his the positions he held; the first police officer in Oyo State to become a civilian governor and the first person from Ogbomoso to serve as ADC to Inspector-General of Police

“Heaven gains as we mourn our loss.

“Otunba Christopher Alao Akala, your impact and contribution will live without forever because you write your name in people’s hearts with gold,” Olawumi said.