“For those years, the oil producing region, rather than being a paradise, has turned hell for the people. It is sad! Unlike in those countries I mentioned above where for over a month I dont see power supply blink or infrastructure deficiency except maintenance becomes necessary, the Niger Delta of my father land is thrown to darkness. All infrastructure collapsed. Farmland destroyed. Human value made valueless. Poverty, illiteracy and ignorance stage protest in the face of every individual.”

Each time I remember my experience of over 30 days in Saudi Arabia last year, and cast my mind on what Dubai has been turned, both Muslim countries of note, from desert to must-visit for notable people all over the world, I shed tears remembering the Niger Delta of my great country, Nigeria. From my findings, I am tempted to conclude that Nigeria’s successive governments have pumped more money into making Niger Delta become like Saudi Arabia, Dubai (I don’t want to mention Europe) if not better, since Olusegun Obasanjo GCFR established Niger Delta Development Commission (NDDC) almost 20 years ago than the Royal Government of Kingdom of Saudi Arabia and United Arab Emirates (UAE) pumped into achieving the glitters that I and many other Nigerians have witnessed and enjoyed in those countries.

For those years, the oil producing region, rather than being a paradise, has turned hell for the people. It is sad! Unlike in those countries I mentioned above where for over a month I dont see power supply blink or infrastructure deficiency except maintenance becomes necessary, the Niger Delta of my father land is thrown to darkness. All infrastructure collapsed. Farmland destroyed. Human value made valueless. Poverty, illiteracy and ignorance stage protest in the face of every individual because of lack of well managed economic, healthcare and educational structures. As a result, there is agitation everywhere and then the unrest across the region. Whose fault? 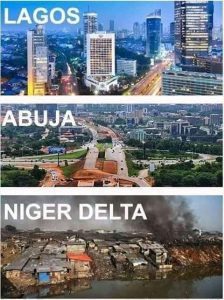 *PHOTO SPEAK: Is this the case of some get, some deprived by the Nigerian system? No. The problem of Niger Delta as been found out to be corruption within. But there is hope in the horizon: Akpabio at work.

For many years we were told it was the fault of a particular region in the country, which has no oil but has so much controlled the oil of the Niger Delta and fed fact on it without minding whether the welfare of the host communities is catered for. This was the information we were fed with until President Muhammadu Buhari came in May 2015. The agitation then changed to anti-Federal Government as if there was no Federal Government before the Retired Army General came to power. It was understandable. The head of the Federal Government before him was a son if the land (Goodluck Ebele Jonathan). The head there now, Muhammadu Buhari is from Northern Nigeria, the region that had been lied against for many years as problem of the Niger Delta. Anyway, we later found out and they, the blackmailers, too confessed.

How did Federal Government cause the problem of Niger Delta? They could not answer. Do they not pay you your statutory Federal Allocation? They said they are paid. Do they not pay you the increased 13 percent derivation payable to each member state in the region? They confirmed payment. A lot of foreign investors have been encouraged to bring businesses to your soil with intent of development. Yes or no? They answered in affirmative. Those companies not only ensure local content in terms of providing jobs for your own people but also, they pay royalties to you as host communities. They confirmed. Yes, the oil belongs to Nigeria but the last time we checked, oil blocs domination are dominated largely by sons and daughters of the land. Yes or no? They answered yes. Then how is Hausa/Fulani the problem when you should be asking your governors, politicians and community leaders who access and manage those funds and opportunities on your behalf? Since then, full stop!

We didn’t stop there. We began to scrutinise the institution of NDDC and we waoh, that great opportunity given by Obasanjo was abused. What supposed to be for the benefits of the generality of the Niger Delta masses, we found out, have become a drainpipe with which few members of the society in that part of Nigeria siphoned the fortunes of the people which Nigeria statutorily provided for them in appreciation of the fact that they bear the brunt of ensuring economic stability for the entire country, Nigeria being unseriously oil-dollar economy.

This was the situation until the time President Muhammadu Buhari came in 2015. He decided that never again should Nigeria be as mono-econony based as it was the norm. He diversified into agriculture and vowed to revive the solid minerals sector such that, while the oil is not expected to dry, other parts of the country have begun to contribute to growing the economy. Today we have food security and many of the things we need now we make. The question remains, “Should the Niger Delta be neglected now because we appear to live our lives sustainably outside the oil?”

This Fulani man said no. He said every Nigerian deserves the largesse of State under the Federal Might particularly in his own time. He then focused on bettering the lives of the people in that oil rich but ironically poverty ridden region. He found out that every effort he made was frustrated yet those at the helms of affairs there are neither Yoruba nor Hausa/Fulani. Not even Igbo. Of a surety, they are what can be called bonafide sons and daughters of the land. But why is it that the dream of Federal Government for Niger Delta does not come through even under the watch of the same people? Does it mean they don’t love their land of birth or that they just do not think that they too deserve good things of life? Or may be they don’t value development because they probably have not seen Saudi Arabia or Dubai. They have seen Dubai. They may not have seen Saudi Arabia.

President Buhari, perhabs also sharing the above concerns, put his nose on the ground and let open his ears to all sounds of waves around him. He picked some information. The problem of Niger Delta is CORRUPTION. The first, second and third cause of the problem is corruption. No more, no less hence the sack of the existing management some seven months ago. Thank God the management was sacked and an Interim Management Committee (IMC) set up. This is because, it is the good work of the IMC that has helped expose the core factors that have militated against the growth and development of the Niger Delta, economically and even politically.

Thanks at this point go to the current Lion of the Niger Delta, whose tenure as another son of the soil in office of the Minister of the Niger Delta Affairs, has been blowing a more assuring Wind of Change in the region. And that is Senator Godswill Obot Akpabio, the man whose achievements as governor of Akwa Ibom State are landmarks, still standing. It is no wonder he sees the opportunity of Minister of Niger Delta Affairs as vital in touching the lives of people of the region by first unearthing the parasites making it difficult for them to live good lives, prosecuting them and then laying a solid foundation that makes attaining the dream destination of choice for Niger Delta a reality.

To do this the NDDC Headquarters is pivotal. Under the IMC supervised by Akpabio, the Commission’s Headquarters building that could not be completed since establishment has now been completed and will soon be commissioned by the big boss, President Buhari.

It is worthy of mention, in a big way indeed that the headquarters is now ready for use. For many years, the NDDC has operated from a rented apartment, which we learned was given out for free during the administration of Peter Odili in Rivers State only to be turned to paid rent at N200 million per year. From now on, there will be no need for such ambiguity. The Pondei-led IMC supervised by Akpabio has made it happen.

One is proud of Akpabio. Hear him: “When I enter a place, I must leave the place better than I met it.” Those were the words of Minister of Niger Delta Affairs Godswill Akpabio when he addressed the management and staff of the Niger Delta Development Commission (NDDC) during a visit to the agency in its rented headquarters on Aba Road, Port Harcourt, Rivers State.

Akpabio, the supervising minister for the interventionist agency, was shocked that the commission was paying over N200 million as rent yearly for the place. According to him, “the situation is disheartening.” He then resolved: “The era of NDDC paying rent for its corporate headquarters is gone for good.” And, truly, it has gone for good.