Another attempt by the Deji of Akure, Oba Aladelusi Aladetoyinbo to stop installation of Iralepo of Isinkan, Oba Oluwagbemiga Adimula Arulewolasi III in Akure south local government area of Ondo State has fallen like pack of cards.

A state High Court sitting in Akure, the Ondo State capital, on Thursday, struck out an application by the Deji of Akure, Oba Aladetoyinbo Ogunlade, seeking injunction to stop installation and appointment of the Iralepo of Isinkan as a recognized chieftaincy by the state government.

Recall that the Deji, through his lawyer, Mr Ekaete Udofot had sued Governor Oluwarotimi Akeredolu, his Attorney General and Commissioner for Justice, and traditional kingmakers of Isikan over the installation of Oba Olugbenga Adimula Ojo as the monarch of Isinkan.

In the case with suit no: AK/111M/2021 filed on October 22, 2021, he prayed the court to affirm that the Ondo State Government had no powers to recognise the Iralepo of Isinkan , a community within the state capital.

The applicant claimed that a judgement of the Court of Appeal had declared that the Iralepo of Isinkan was a quarter Chief under the Prescribed Authority of the Deji of Akure.

But attorney to Oba Iralepo of Isinkan and the Isinkan community, Chief Sola Ebiseni, raised a preliminary objection challenging the locus standi of the Deji to institute the action being not a member of Isinkan or of its Ruling House.

In the preliminary objection, it was stated that the applicant failed to fulfil the conditions precedent to instituting the action under the Chiefs Law.

It was also submitted that the suit of the Deji lacked merit on grounds that the Instrument of Appointment of the Iralepo of Isinkan made by the Executive Council on May 11, 2005, has not been challenged by the Deji or any other person in any court and on the basis of which Oba Joseph Olu Ojo was appointed in 1995.

In his judgment, the presiding judge, Justice Olusegun Odusola, held that the appointment of the Iralepo of Isinkan as a recognized Chieftaincy subsists on grounds that the Instrument of appointment legally made by the Executive Council had not been challenged or set aside.

Consequently, the court dismissed the suit of the Deji and the Akure community, saying it lacked merit.

Not satisfied with the judgement, the Deji again filed an injunction before the high court.

At the hearing on Thursday, Counsel to the Deji made a U-turn and applied to withdraw the injunction.

Counsel to Iralepo, Chief Sola Ebiseni however argued that the application was an abuse of court process and delay and asked the court to award a fine of two hundred thousand naira (N200,000) against the Deji, Oba Aladetoyinbo.

Ruling on the application, Justice Odusola struck out the injunction for abuse of court process and wasting of time and subsequently fined the Deji, Oba Aladetoyinbo the sun of fifty thousand naira (N50,000) to be paid to Iralepo of Isinkan. 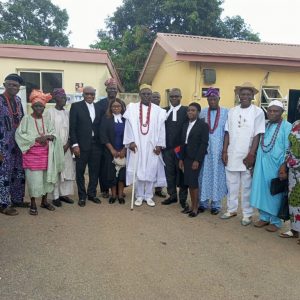 HRH Oba Olugbenga Ojo Adimula Arulewolasi III, the Iralepo of Isikan Land, Akure South Local Government Area of Ondo State, after an Akure High Court struck out yet another case by Deji of Akure to stop the Ondo State Governor, Olurotimi Akeredolu SAN, from installing him, on Thursday May 26, 2022. 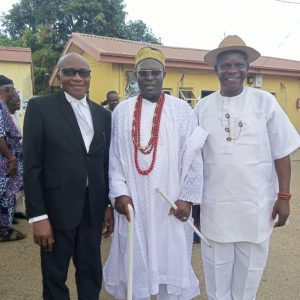