This concerted effort is necessary because, not even the unnamed official, who said the letter in circulation is fake, was able to answer certain questions about letterhead, reference number and signature of the governor that are found on the letter, which keep the much sought truth about the matter on the balance until the governor or his representative officially speaks.

What looks like final confirmation of the death of Nnamdi Kanu, Leader of Nigeria’s terrorist group, Indigenous People of Biafra (IPOB) came Saturday from a letter by Government of Abia State, the country’s home of the “late” Igbo group leader.

The letter, dated May 2, 2020 and with a reference number GH/ABSG/102 signed by the Governor of Abia State, Okezie Victor Ikpeazu Ph.D, was yet to be disputed or confirmed to have emanated from the government as at the time of filing this report.

The DEFENDER, which has been following and updating the public about the issue of his alleged death since the news broke out, is however continuing in its effort to get to the root of the stories especially the letter credited to the government of Abia State.

This concerted effort is necessary because, not even the unnamed official, who said the letter in circulation is fake, was able to answer certain questions about letterhead, reference number and signature of the governor that are found on the letter, which keep the much sought truth about the matter on the balance until the governor or his representative officially speaks.

Although Kemi Olunloyo, who broke the news of Kanu’s death, had since updated posted an update saying, according to further investigation, he did not die as she earlier reported via her Twitter handle, the letter purportedly written on letterheaded paper of Governor of the state with his signature appended, has left more questions than answered about the death of the terrorist group leader.

Kanu’s IPOB was declared terrorist by constitutional court in Nigeria and, in addition, proscribed by the governments of five South East states of the country.

According to the letter, “The Abia State Government has received with great shock, the news of the untimely death of its illustrious son, founder and leader of the Indigenous People of Biafra (IPOB), Mazi Nnamdi Kanu.

“It is unfortunate that Mazi passed on a few months after his beloved parents were buried.  The late Mazi will be remembered for his energy resilience and doggedness in advocating for the freedom of his followers.  His memory and legacy will forever be cherished and engraved in our hearts.  We pray that God, in his infinite mercy, will grant his family and the entire people of Afaraukwu-Ibeku the fortitude to the irreparable loss.  May God comfort all those he has left behind.

“Though the Abia State Government believes in the unity, indivisibility and indissolubility of the Nigerian State as enshrined in the Constitution, it hopes that the demise of Mazi will open a new vista of opportunity for IPOB to join other well meaning Igbo sons and daughters to pursue a Nigeria in which equality, equity, peace and progress will define our nationhood.

“While the interment and other burial rites are being awaited, the Government enjoins all Abians and IPOB members to remain calm, peaceful, law abiding and go about their normal businesses.  It is also the desire of Government that everyone stays safe and observe all advisories relating to the containment of the Covid-19 pandemic in our State.

“May the souls of Mazi and all the departed rest in peace. Amen,” the letter signed by Governor Okezie Victor Ikpeazu, Ph.D read in details. 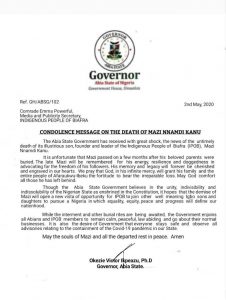 With this new letter, Facebook live broadcast by a person claiming to be Nnamdi Kanu has been rendered useless as even those who had thought the death news as broken by Kemi Olunloyo was untrue, as she later said, are now changing their minds by refusing to accept the update trying to tell how the dead was not the real Kanu.

They said he actually died and nothing more, just as they are standing with earlier demand reported in The DEFENDER that should they believe any such story as broadcast, the claimant must come down to the soil of Nigeria to prove that he is Nnamdi Kanu, and that, else, they would continue to treat him as an impostor.

“Late” Kanu is believed to be among the first group of people that introduced Fake News into social media in Nigeria through his Radio Biafra.  Others identified with him in the act are those whose goodwill he enjoyed doing it among who are a former Minister of Aviation, one of serving governors at the time and other “enemies” of Nigerian government supporting Kanu’s “IPOB” activities believing that, it would aid their workings against the re-election of President Muhammadu Buhari  during the 2019 election.

It will be recalled, as the Fake News raged, one of the IPOB leader’s supporters and then a serving governor, Ayo Fayose, had threatened that he would commit suicide if then ailing President Buhari receiving treatment in London returned alive to Nigeria.  Like Fani-Kayode, another such Fake News creator and former minister, Nnamdi Kanu, who brought the story of “Jubril Sudan”, saying “Buhari that later returned alive was Jubril from Sudan and not the Buhari the President Nigerians voted for”.

Nnamdi Kanu had told many stories that had led to inter-ethnic conflicts mainly in South East and a Rivers State community, just like many of the reports broadcast on his Radio Biafra tended to discredit the integrity of the Nigerian state, its government and security agencies especially the Nigerian Army and the Department of the State Services (DSS) in the eyes of the world and, by so doing, almost setting Nigeria on fire.

In the meantime, a report published April 28, 2020 signted on 9news.com, has it that Igbos in Nigeria Movement (IMN) also condoled with the family and friends of Nnamdi Kanu over the alleged demise of the leader of the proscribed Indigenous People of Biafra (IPOB).

Kanu’s rumoured death was the major subject on social media last week with several pictures showing the IPOB leader in a casket. 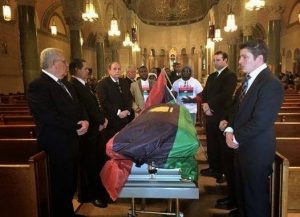 Casket, covered with ‘Biafra’ flag, believed to contain the remains of Nnamdi Kanu, following his alleged death in Italy.

In a statement signed by its President Mazi Ifeanyi Igwe, on Monday, INM said Kanu “succumbed to a combination of spiritual factors and complications from COVID-19 in Europe sometimes this month.”

Although INM differed with Kanu’s approach towards liberation of the Igbos, regardless, it said his passing will cost the south-east the diversity of voices championing their cause.

The group, however, urged Ndigbo and all Nigerians not to desecrate his memory by impersonating him, “using body doubles and doppelgangers, issuing statements in his name and continuing to operate his social media account to create the impression that he is still alive.”

The report read in full: “Igbos in Nigeria Movement regrets to announce the passing of the first son of the late Eze Israel Kanu of Afara Ukwu Umuahia in Abia State, Mazi Nnamdi Kanu who succumbed to a combination of spiritual factors and complications from COVID-19 in Europe sometimes this month. His passing is particularly painful considering the losses that his family has suffered in recent months.

“We use this medium to express our heartfelt condolences to his immediate and extended family members and to the entire Igbo nation. We pray that God almighty grants him eternal rest and that his ancestors overlook his shortcomings.

“While we differed with Nnamdi Kanu in his lifetime over his approach towards the quest to improve a lot of the Igbos, we must state that his passing will cost the south-east the diversity of voices championing the cause of our people. We consequently appeal to Ndigbo and all Nigerians to not desecrate the memory of the departed in keeping with the tradition of not speaking evil of the dead by impersonating the late Nnamdi Kanu or using fake identities to continue his struggles.

“We, therefore, call on the Indigenous People of Biafra (IPOB), which Kanu passionately led while alive, to cease all efforts at impersonating him by using body doubles and doppelgangers, issuing statements in his name and continuing to operate his social media account to create the impression that he is still alive. Such gimmicks re-open the wound of Kanu’s bereaved family each time they are employed and are barely worth propaganda value they are intended for.

“Those behind the body double gimmicks should refrain from doing so because Nnamdi Kanu was an illustrious son of Igboland and Igbos would like to bury him in a befitting way. He should not be made a caricature of as is being currently done.

“Igbos in Nigeria Movement wants to further appeal to law enforcement agents and the military that it is time to move on and allow Nnamdi Kanu to find in death the peace that eluded him in life. We make this appeal because the dedication with which these agencies carried out their duty must have contributed to Kanu’s demise by making it impossible for him to bury his father as prescribed by tradition as he feared being arrested during the funeral rites.

“Although, he reportedly died of complications from COVID-19, according to the death certificate issued to his family, there is every likelihood that the gods merely took advantage of the virus to visit calamity upon him for failing to perform the customary rites during his father’s funeral because he was on the run from justice. So, while the cause of death appears to be coronavirus, the discerning Igbo knows that the real issue is Ofor-t’Ofor as captured in Igbo spirituality.”