*’Never are we going to have political bandits in government again’

In the news was report where the All Progressives Congress (APC) presidential aspirant, Bola Ahmed Tinubu, was tongue-lashed by a chieftain of opposition Peoples Democratic Party (PDP), Chief Olabode Ibiyinka George, who said characters like him are not wanted in Nigeria’s presidency. Secretary General, South West Agenda for Asiwaju 2023 (SWAGA’23), Hon. Bosun Oladele, gave a swift reply to the former Military Governor of Old Ondo State in this interview with The DEFENDER held inside his office in Lagos.  Oladele, also former Oyo State Commissioner for Information and Orientation and Member House of Representatives representing Oyo State’s Irepo/Orelope/Olorunsogo Federal Constituency at the National Assembly (2015-2019), said more in the post-declaration interview discussing going forward, after Tinubu informed President Muhammadu Buhari of his intention to run. Excerpts:

In this office on the eve of New Year, you told us that by Asiwaju Tinubu’s promise not to let you down, it meant that he had confirmed his intention to contest for 2023 presidency.  Now that he has informed the President, which is the core of achievement that your SWAGA’23 wanted to make, how does it feel with you in all honesty?

Well, I feel great because, not only have I been proven right, it shows that what we embarked upon, starting from 15 December 2020 in Ibadan, has now culminated in his categorical statement; let me use it in his own words, ‘categorical yes’. 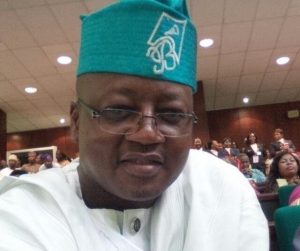 I was coming to that.  I mean, what does it mean to you to hear the leader using the phrase ‘categorical yes’?

There is no room for any misinterpretation.  He is being categorical.

Like The DEFENDER use of ‘political dribble’ that confirmed his ambition, when you look at the statement, “I have informed the President, I have not informed Nigerians”, are we not coming again to another Linguistic President like President Buhari’s “I am for everybody, I am for nobody”?

Well, unfortunately, people would want to start reading meaning to that, but there is no meaning to be read.  He is just going by the books, by acceptable standard in politics. Asiwaju has been tagged as the national leader of APC, but the President is the Leader of the country and, at the same time, the Leader of the Party.

So, if, in the scheme of things the President is above Asiwaju and Asiwaju has gone to him to say, “I am contesting,” if the son needs the approval of the father to make his early move and that son has gone in to see his father and has told him, “This is what I want to do,” and on his way out he has been accosted and asked, “What did you go to do”, what do you make of that? That was what happened. And he answered, “I went to tell my Papa this is what I want to do, though I have not told the entire family”.

But he has confirmed to us that he has told the President.

And the tone he is going to use at that forum will be different from what he used while informing the President?

Of course.  When that is done, he can say, “I have now told my people”.  Yes, and his people are Nigerians. So, the man is being deliberate about everything that he said and he means it the way he said it.

What does Asiwaju’s declaring now portend for ambitions of other South West gladiators, who also have interest to contest?

It will be the same thing.  Too many cooks spoil the broth.  This is South West Nigeria. We are saying that it is our turn but we don’t want to go out there and proclaim that with cacophony of voices.  We must have that unity of purpose.

And on that note, I would say, in South West, without prejudice to whatever anybody has in mind, without taking away their rights to aspire for positions, I would say that it is an opportunity for us to showcase what we have in this part of the country.  And there is no better way to do that than to stand united.

I would appeal to everybody to let us sheathe our swords, let us come together and support our own shining light, a master planner, a mentor of mentors, a leader of leaders, a political engineer and a strategic leadership surgeon; somebody that has done it before, a trail blazer, a pathfinder and a bridge builder.

That is what Asiwaju Tinubu is. Let’s support him so that he can take us to where we want to be.

When people of a zone say they want Presidency zoned to their region being their turn under a Turn-by-Turn Nigeria Limited arrangement like Chief Bode George would say, it is expected that all members of the zone, regardless of party affiliations, would collapse interests and structures for a united force to achieve it as collective goal.  But Chief Bode George, the Atona Oodua in the same region that Tinubu is Asiwaju of Lagos (Yoruba Land), few days ago in his reaction to the declaration, said ‘characters like Tinubu’ are not wanted for Nigeria’s Presidency.  How does that sound to you at SWAGA’23?

Let me start from that last statement of yours.  With due respect to Chief Bode George, who is talking about character, that is not his call.  It doesn’t lie with him.  What character is he to be enquiring about the character of others?

You will recollect that if it was not about military dictatorship, would anybody like him have become a leader or a governor anywhere?  And let him come out and state his achievements when he was Military Governor of old Ondo State.

So, it doesn’t lie in his mouth to say whatever he is saying.  As a matter of fact, he has been saying too many things at the same time for there to even be any relevance to be accorded to his statements.  So, is he the one that will come out and say he wants to be president; of which nation?

And if we are talking about determining who should be the President, to my own mind, he (Chief Bode George) is not among the people that will nominate a Presidential candidate.  He is not.  I am so sorry to say that.

Someone would think you are still embittered with Chief Bode George being part of the Chief Olusegun Obasanjo-led PDP arrangement that bequeathed the Jonathan government to Nigeria, which you said in this office in the buildup to 2015 generation elections and which “negative” impact is still being being felt in the nation’s security, politics and economy…?

(Cuts in) Thank you for recalling that.  I said it prior to 2015 elections and, of course, I am not God and I have not tried to play God, it came to past.  Never are we going to have such group of political bandits in government again.  Never!

Even in Lagos State PDP alone, he has never had a role to play in the emergence of candidates year-in, year-out every electoral cycle.  Maybe he should determine who should be the councillor in his ward first and let us see how successful he will be at that attempt.

It is also part of the antecedents.  What responsible party would fail to pay statutory dues in respect of the property they are occupying?  So, morning shows the day.

I would rather advise, let them go and put their own house together first.  Let him, as the leader that he has called himself in his own political party, see to how they can continue to pay, whether, their rent or statutory dues in respect of the property they are occupying.

Let him advise his party nationally to go and complete its national secretariat in Abuja.  Enough of abandoned projects!

We have seen how Asiwaju Bola Tinubu has taken Lagos State and we are saying let him come and replicate the same thing at the centre.  He has tried by bringing us to the centre in the first instance, through the emergence of President Muhammadu Buhari, currently, and let’s take it a step further. Who says a kingmaker cannot be king?

I don’t know the position of Chief Bode George in the scheme of things in respect of all of these.

Well, if it is about, late General Sani Abacha, who was always kingmaker through his roles in all military coups, actually became king as Head of State and Commander-in-Chief of the Nigerian Armed Forces. Is that correct?

Oooh! That is even in respect of military dictatorship, where they do things by violence (or force).  Now we have orderliness in succession.  As long as the kingmaker is  not disqualified, he is fit to be the king.

Going forward, what do you have on the table for Nigerians as you will be campaigning for Asiwaju Bola Tinubu, in event that he gets the ticket of your party later in the year?

I know that Asiwaju Bola Ahmed Tinubu is strategically methodical.  Mark my choice of words. He is strategically methodical.  He knows how to assemble the best team in the land.  He has done it before. The team he assembled as commissioners, cabinet members in those days, most of them are still relevant in the scheme of things, politically, in this country today.  No other person has put together such a team that would still be very, very much relevant in the corridors of power and in the scheme of things.

And I know that just like he did in Lagos State with developmental plan, he will assemble a team that will prepare a road map for his administration. God willing.