About 30 million people are adversely affected by a shrunken Lake Chad, which is now just about 10 percent of its original size, President Muhammadu Buhari has said. 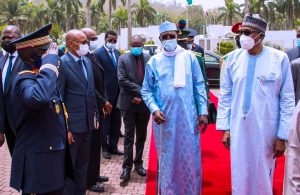 President of Nigeria, Muhammadu Buhari, being shown the Chadian officials while receiving the President of the Republic of Chad, Marshal Idriss Deby Itno, in State House Abuja, on Saturday 27th March 2021.

Through a statement issued in Abuja by Special Adviser to the President on Media and Publicity, Mr. Femi Adesina, copy of which was sent to The DEFENDER, the President was said to have spoken on Saturday at State House, Abuja, while hosting the President of Chad, Marshal Idris Deby Itno, who paid him a one-day official visit. 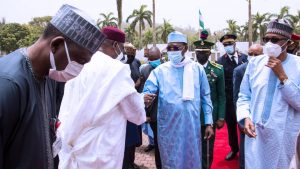 “It is imperative that there be water transfer to the Lake Chad from the Congo Basin, so that the people can resume their normal lives,” President Buhari said.

He added that with inter-basin water transfer, farming, fishing, animal husbandry would resume, and curtail irregular migration of youths, who now dare the Sahara Desert and the Mediterranean Sea, to get into Europe, seeking greener pastures.

“I’ve been engaging with the relevant stakeholders in Africa and beyond, on why we need to recharge Lake Chad. Nigeria will benefit more, but it is also advantageous to everyone,’’ President Buhari added.

He appreciated Chad for its role in curbing insurgency in the region, particularly the Boko Haram challenge.

“We appreciate what you are doing on security. When I first came to office in 2015, I came to see you, as well as leaders of other neighbouring countries, because it makes sense to be in the good books of our neighbours.”

President Buhari wished Marshal Itno well in the general elections coming up in his country in April.

The Chadian leader thanked President Buhari for receiving him, saying, “We are neighbours facing similar challenges.”

He added that he was also around to explore other bilateral issues, in addition to security.

On the recharge of Lake Chad, he counseled the Nigerian President to consider convening an international summit to move the idea forward.

How to eradicate Boko Haram

In the meantime, the President of Chad, Marshal Idris Deby Itno, has expressed optimism that the armies of the four countries under Multinational Joint Task Force (MNJTF) can eradicate the Boko Haram insurgents.

Responding to questions from State House correspondents after the official visit, the Chadian leader said terrorism remains an issue in the Lake Chad Basin and the Sahel region of Africa because the MNJTF has not been carrying out enough required operations.

According to him, he discussed the situation at the MNJTF with President Buhari, saying a situation where the joint military outfit embarks on just one operation in a whole year has made the fight difficult.

Marshal Into expressed optimism that with the new strategies being deployed and new officers with fresh ideas being assigned to take over commands at both national and regional levels, the menace of the various terror groups, including Boko Haram and the Islamic State, West African Province (ISWAP), would be addressed permanently.

“However, with the new security apparatus that has been put in place with the new security chiefs and not only in Nigeria, but even on the Multinational Joint Task Force itself, which also has a new leadership, that we’re hopeful now that with new strategies, and new dynamism, that we’ll be able to address definitively the issue of Boko Haram.

“Unfortunately, the resilience of Boko Haram and the Islamic State in the Lake Chad Basin has been unprecedented. They are being supplied and being trained and being formed through Libya. The MNJTF has done a lot of work and as you have seen recently, we’ve had exchanges on this with my brother on the way ahead. With the new team of the Chief of Defence Staff and the new Commander that has been appointed at the Multinational Joint Task Force, they are convinced that we can eradicate Boko Haram.

“There’s a lot of hope on this new team, with this new strategy. I remain confident that the four armies of the four countries can finish this evil and eradicate Boko Haram once and for all,” he said.

President Itno, while speaking further, said a number of important issues including the challenges facing Nigeria and Chad were discussed at the meeting.

He said the meeting also discussed various bilateral relations between the two countries.

The Chadian President, who also said that they discussed the issue of Islamic state and the challenges that they pose to the two countries as well as the lake Chad environment, added that the issue of transfer of water from the Central African Republic was looked into with the question of Chad being a landlocked country.

They also discussed the issue of power and the interconnection, connectivity of power between Nigeria and Chad and the closure of the borders as well, adding that the discussion made him to understand the reasons why the borders were closed.

Last year, Derby led his men on an offensive against Boko Haram. Many terrorists were killed in the operation.

Other photographs from the visit: 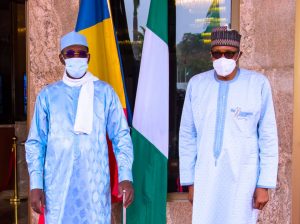 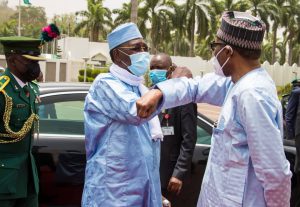 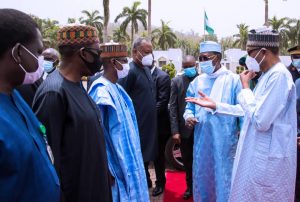 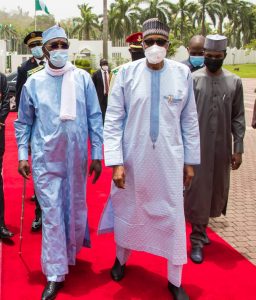 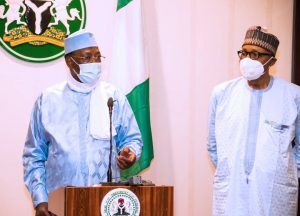 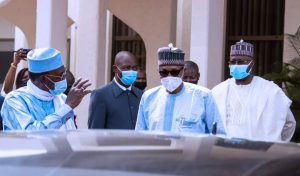 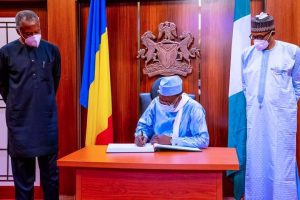