I have cause to pick this write-up of long time (posted on my Facebook wall in 2017) for publication, especially now that Prince Bola Ajibola (SAN) will, again, be celebrated either on his 86th birthday, March 23, 2020 that is Crescent University Abeokuta Founder’s Day, or earlier before then, as Vanguard Media Limited’s Life-Time Achievement Award Winner, on March 20. Excerpts:

In 1992 when I worked as Clerk in the Office of the Executive Vice Chairman of Norman Holdings Limited, on Adeniyi Jones Avenue, Ikeja, Lagos, I met a man called Prof. Yemi Osinbajo. He had his Law Firm somewhere near Ghana Embassy Makarty in Lagos (very close to TBS). I also through my job at Norman met Alhaji Usman Shagari, who once gave me N100 in 1992 and I ran smiling to Oceanic Bank Aromire Junction Adeniyi Jones Avenue, Ikeja (Don’t laugh. Just see where I am going). Alhaji Usman Shagari, son of former President Shagari, later became Special Adviser to Senate President Anyim Pius Anyim, the position he occupied until he died along with Sultan Muhammadu Maccido of Sokoto in the ill-fated ADC aircraft crash in Abuja late 2006. Working with NHL I met Chief Joseph Waku who later became a Senator of the Federal Republic representing one of Benue State Senatorial Districts. I was very close like son to those people because their files and other administrative works were always subjects of my handling.

Prof. Yemi Osinbajo was lawyer of the company and he was very greatly revered by all including we that knew him as he would come in his lawyerly garb with that lawyer’s hand bag.

I later moved on in life to become a journalist and became known to the Bola Ajibola & Co then on 52 Allen Avenue, Ikeja, Lagos. Bola Ajibola was already at The Hague as Judge of the International Court of Justice (ICJ) leaving Uncle Segun Ajibola now a Senior Advocate of Nigeria (SAN) as Principal Partner of the Law Firm on Allen. My former office, NHL, had a Secretary (Egbon Kola Adereni) to one of the Assistant General Manager (AGM Finance). The AGM is a very highly religious and morally upright lovely Christian man who later became Chairman Board of Directors of WEMA Bank, Mr. Ade Asekun.

Egbon Kola Adereni later became a lawyer but he told me that he was Private Secretary to Prince Bola Ajibola until he left Nigeria for The Hague. And further revelation showed me that while Prince Bola Ajibola was Attorney-General of the Federation and Minister of Justice, the lawyer, Prof. Osinbajo was Senior Special Assistant to the Honourable Minister of Justice. Prince Bola Ajibola himself in the course of my son-to-father relationship with him had told me severally how he appreciated Osinbajo’s working with him as SSA in the sense that the Law Reforms that he carried out as Minister of Justice was largely partaken in by him, Professor Yemi Osinbajo now Senior Advocate of Nigeria (SAN) by peak of lawyerly practice and Grand Commander of the Order of Nigeria (GCON) by destiny.

Having left NHL a long time ago, I lost contact with Osinbajo but now I was and am still already personal Journalist of Prince Bola Ajibola (SAN), who took me to Chief Obafemi Awolowo’s Ikenne, Ogun State home to pay condolence visit to Mama HID Awolowo on the death of her son, Chief Oluwole Awolowo. While with Baba Bola Ajibola on our way to the car, a black SUV drove in and it was Prof. Yemi Osinbajo. His wife being granddaughter of Papa and Mama Awolowo. His face had not changed and he never went fatter than he used to be. (Can Osinbajo ever go fat even if fed with ten cows a day? Great nature! Fantastic stature!).  Except that he had grey hair now perhaps due to his days as Attorney-General of Lagos State. But is he a twin brother? Because while in Lagos as Attorney-General, there was another Prof. Akin Osinbajo looking almost like him in Ogun State also as Attorney-General. Waoh! 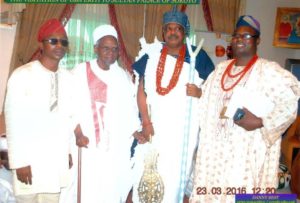 At Awolowo’s home, Osinbajo came down and as he walked in, I said, “Good afternoon Prof., Bashir Adefaka of Norman Holdings Limited.” He remembered quickly even before his aid tried to ask me to make way and the aide relaxed and we exchanged some words and he gave me his phone number, which I still keep until the day he will leave office because now I can’t call him not that he has changed his number. As Running Mate we still exchanged texts. I had been calling him and we have been talking. We had an appointment for “next week” for interview and for him to get me directed to a particular person that I mentioned earlier and before that “next week” came, he was nominated and picked as Running Mate by APC Presidential Candidate, General Muhammadu Buhari, another appointed Leader that is also now Grand Commander of the Federal Republic (GCFR) by destiny.

Is this enough to deprive me access to him? Yes and No.

We went to election we voted for Buhari the man I started loving because of the hate of the certain people and a coincidental bomb attack at him, which his dangerous haters denied knowledge of, but he was saved by the whiskers through the mercy of Almighty Allah. We also voted for the great combination of Buhari and Prof. Yemi Osinbajo whom I personally love right from my days in Norman Holdings Limited. Today, I am also a godson to Prince Bola Ajibola who made me his personal Journalist just like I am godson (especially) to Alhaji Kola Animasaun, who is creator of great opportunities for the young to grow and now I begin to see myself as truly growing.

But can we see the cycle of relationship that brought Prince Bola Ajibola and Osinbajo together from the start time to now that Osun State Governor at a Prayer for Buhari and Nigeria led by Sultan of Sokoto Alhaji Muhammad Sa’ad Abubakar III in Osogbo publicly said, “The man that has the greatest influence on the current Vice (Acting) President of the Federal Republic of Nigeria today, Prince Abdul-Jabbar Bola Ajibola!”

Many of the people in high places you see very close to each other or one another together started it long ago. So, what manner of Nigerian people do you want to be? Of those who have good antecedents good and clean enough to mobilize some diehard commitments like we have today for President Muhammadu Buhari and Vice President Yemi Osinbajo despite our being tagged “heroworshipping” their government or like the one which continues to bind the Vice President to his former boss, Prince Bola Ajibola or like the one which will always make me want to die for my father or like the one which will make me prefer Alhaji Kola Animasaun to any other person except my father in whatever case? IF YOUR PAST IS GOOD AND CLEAN, YOU WILL WIN THE HEARTS OF GOOD PEOPLE IN HIGH PLACES IN YOUR TODAY LIFE.