*Promises to partner new team as it plans national convention

*Thanks Buhari, NEC for finally rescuing APC from collapsing

The immediate past Acting National Chairman of the All Progressives Congress (APC), Chief Victor Giadom, has handed over the leadership of the party to the recently set up Caretaker Committee Chairman, Mallam Mala Buni, who is also the Governor of Yobe State.

The handing over ceremony took place at the APC National Secretariat, Abuja, five days after the National Executive Council (NEC) meeting summoned by the former chairman dissolved the National Working Committee (NWC) of the party and replaced it with a Caretaker Committee headed by Buni. 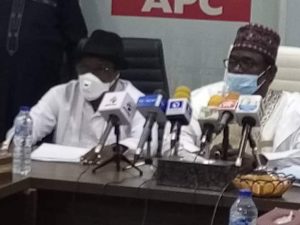 Since handing over is only done by the last occupant of an office, Chief Giadom, who replaced Adams Oshiomhole upon his suspension by courts, became the natural person to hand over the instruments of office to his success which he has just done.

Governor Mai Mala Buni took over from Giadom as the new Chairman of Caretaker/Extra-Ordinary National Convention Planning Committee, as the dual purpose committee met in Abuja on Monday to plan a nation convention for the election of new officers for the party.

In his handing over remarks, Giadom assured members of the committee of his readiness to support and partner with them towards realisation of the party’s goals.

“I Chief Honourable Victor Giadom, the outgoing Acting National Chairman, today Monday 29th of June 2020 hand over to the Chairman and members of the National Caretaker Committee of the All Progressives Congress. 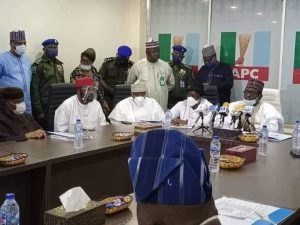 “I assure the Committee of my readiness to partner with them to achieve the Party’s goals and objectives towards a successful National Convention. I pray that the almighty God grants you wisdom to pilot the affairs of the Party,” he said.

Commenting on developments which led to him handing over to the caretaker committee, the former APC sectional national chairman said, “I feel extremely grateful to God and also extremely grateful to the leadership of our own party especially Mr. President, Commander-in-Chief, Muhammadu Buhari, and the entire leadership of the National Executive Committee for rescuing this party from what would have befell the party.

“Today, our party has been repositioned to go to greater heights and I can assure you that with the calibre of people so selected by NEC of our great party to pilot the leadership of our party into the National Convention, I am indeed grateful rest assured that our party will emerge stronger.”

Buni had earlier reportedly assured members of the party of reforms after the oath of office was administered on members of the 13-member committee at the APC National Secretariat.

“lt is time for this committee, therefore, to commence the process of true reconciliation among leaders and members of the party at all levels. It is our belief that the decision by NEC to constitute this committee will mark the beginning of a new chapter in our great Party,” he said.