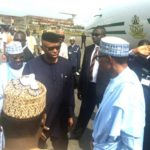 *President Muhammadu Buhari (4l) flanked by the the APC National Chairman, Chief John Oyegun (5r) and the APC Candidate at the Ondo State Election, Barr. Rotimi Akeredolu while the Senate President, Bukola Saraki (4r) and other leaders in a group photograph with all the APC Aspirants during the meeting between President Buhari and all the Onto State Gubernatorial Aspirants of the APC as part of the events markIng the grand finale of the APC Governorship Campaign at The Dome, Akure.

*Says those who left APC after primaries only returned to base, not APC members

*Mimiko unfortunately retured Ondo State to PDP, party of armed robbers, after Ondo, Edo were rescued from it – Adams Oshiomhole

President Muhammadu Buhari on Saturday in Akure commended Ondo APC gubernatorial aspirants for their loyalty to the party and supporting Chief Oluwarotimi Akeredolu, the party’s candidate for the November 26 elections in the state.

Speaking at a meeting with the gubernatorial aspirants, APC elders in the state, and national officers of the party, President Buhari said the unity of the party was crucial for the outcome of next Saturday’selection.

“I am very pleased that those of you who lost the primaries are still very much in the party.

“That you lose elections doesn’t mean you should walk away, you keep on trying. I went to the Supreme Court three times in my bid to become the President of Nigeria.

“ I like your high spirit and your commitment to the party and I hope your constituencies are taking note of that,’’ the President told the aspirants shortly before departing for the Democracy Park in Akure for the grand finale of the Ondo APC gubernatorial rally.

The President, who was accompanied to the meeting by the Senate President, APC National Chairman, several APC Governors and Ministers, told the party faithful in Ondo that he looked forward to a successful election next week.

President Buhari assured Nigerians that determined, steadfast and patriotic people in the APC-led government will transform the nation’s ailing economy, which was run aground by the party that governed Nigeria for 16 years from 1999-2015.

In his remarks, the representative of the aspirants, Barr. Tunji Abayomi, assured the President that they have resolved to deliver Ondo to APC.

“No single aspirant left the party after the primaries. Those who left the party were not party members; they returned to where they belonged,’’ he said.

“We have fielded  an experienced, informed, hardworking and capable legal practitioner to work with President Buhari to carry out massive industrial development, job creation, eradication of poverty and massive economic improvement in the nation,’’ he said.

A national leader of the All Progressives Congress (APC), Asiwaju Bola Ahmed Tinubu, was conspicuously absent at the grand finale rally of the party’s candidate for the November 26 gubernatorial election of Ondo State.

The rally, which was attended by President Muhammadu Buhari, was also boycotted by the governors of Lagos, Oyo and Osun states, Akimwumi Ambode, Isiaka Ajimobi and Rauf Aregbesola respectively.

At the governorship primaries conducted in Akure on September 3, Akeredolu defeated Segun Abraham who was believed to have been endorsed by Tinubu.

Ambode, Aregbesola and Ajimobi are perceived as APC governors in the South West that are loyal to Tinubu.

At the rally held at Democracy Park, Akure, President Buhari said he was happy with the primaries that produced Akeredolu, describing it as transparent.

The President presented Akeredolu as the party’s gubernatorial candidate and canvassed votes for him.

He thanked the party’s faithful for “coming even in the sun and standing for the some hours. It shows the level of commitment that you have for the party.

“I have confidence in the gubernatorial candidate of the party and I was happy with the transparent way the primary election was held.”

The security details of the Nigerian Police was led by the Ondo State Commissioner of Police, Mrs Hilda Ibifuro.  Other security operatives present included men of the Immigration Services, FRSC, Nigeria Police, NSCDC, the Nigerian Army and Nigerian Air Force.

Buhari inspected a guard of honour mounted by men of the Nigerian Army before leaving the airport.

The Senate President, Dr. Bukola Saraki and the APC National Chairman, John Odigie Oyegun, arrived at different times after the President had left the airport.

The rally kicked off after 1pm, with governors speaking first.

Former Governor Adams Oshimhole roused the crowd, comparing Ondo State and his Edo State, saying the two states were rescued from the PDP in 2008.

Oshiomhole noted with surprise that Governor Olusegun Mimiko unfortunately returned Ondo State to the PDP, which he described as a party of armed robbers.