Following a standing order by President Muhammadu Buhari to security chiefs in Nigeria to fish out sponsors of terrorism and other criminal activities responsible for insecurity in the country, the order appears to have been activated with all seriousness.

This was seen in what happened one day after the president departed to the United Kingdom for his routine medical check-up and the National Drug Law Enforcement Agency, NDLEA, made an important arrest.

Reacting to the new catch by the anti-narcotics agency, Digital and Social Media Aide to President Muhammadu Buhari, Lauretta Onichie, re-echoed that the NDLEA on Thursday, April 1 announced that it arrested a hard drug provider for Boko Haram terrorists in Nigeria.

The name of the 35-year-old suspect, who happens to be a Chadian national, is Adama Uomar Issa, who procures narcotics for the insurgents in Taraba State, North East Nigeria

Earlier, the Federal Government had said that security agents had arrested some Nigerians funding terrorists.

The Senior Special Assistant to the President on Media and Publicity, Malam Garba Shehu, made this known on Tuesday, March 30. 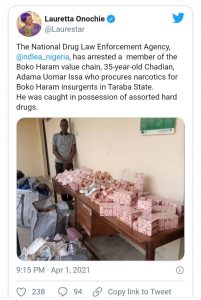