An analytical study of the dangers inherent in envenomations twice in a short time period by the same kind of snake, empirically revealed that the chances of survival by the victim, due to allergy is under probability.

The above analysis is a replica of the macabre dance and living in a state of limbo, which the Edo Political Movement( EPM) has plunged themselves wherein they have again today, fixed their necks on another guillotine, following a botched attempt to upturn Obaseki’s victory via a spurious allegation of forgery and perjury preferred against him at the Federal High Court sitting in Abuja, when they are yet to recover from the 19th September, 2020 headbutts received in view of the abysmal performance. 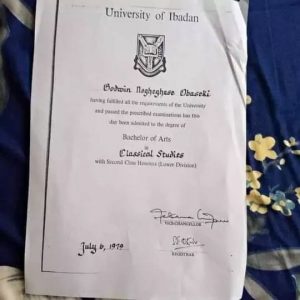 Apart from the show of shame by the two professors of Law and Economics, respectively, who, served as witnesses to the defendants, the authorities of the University of Ibadan through its Registrar, Professor Olubunmi Faluyi, has graciously reiterated its stand for the umpteenth time, that Obaseki was duly admitted into the University in 1976 and successfully graduated in 1979 with a Second Class Honours ( Lower Division) in Classical Studies.

This development immediately sent cold shivers down the spine of Obaseki’s political adversaries, who had already vowed to make good their threats of gagging the Judiciary to oust the innocent and performing Governor of Edo state.

A mild but comic drama however ensued today , at the Federal High Court during the cross-examination of EPM’s witness by Counsel to Obaseki, Ken Mozia (SAN), the witness, who identified the University of Ibadan Bachelor of Arts in Classical Studies certificate issued on 6th July, 1979, to Obaseki, observed that, while the signature of the vice chancellor was very clear, that of the registrar was “not legible.”

When asked a very rhetorical but very slippery question by Mozia( SAN) on the qualification for direct entry into the university, the witness told the court that candidates with Advanced Level or Higher School Certificate (HSC) are admitted for a three-year degree programme, and went ahead to confirm Obaseki’s HSC certificate issued to him by the West African School Certificate (WASC) in June 1976.

When asked by the Counsel to the Peoples Democratic Party (PDP) Rasaq Isilalomhe (Esq), if he had ever cited the original copy of the University of Ibadan certificate issued to Obaseki, the witness said: “I am not aware that an original copy of the degree certificate was issued to the first defendant by University of Ibadan” just as Professor Edobor also told the court that he has never seen the original of the HSC WASC certificate issued to Obaseki in 1976.

The seemingly confused Professor also told the court that his allegation of forgery against Godwin Obaseki was based on photocopies of certificates Obaseki presented to INEC.

In view of the above drama as dramatized by a baby Professor of Economics, which is a replica of a Nollywood movie, titled ” Ukwa”, has lent credence to the glaring fact that EPM has totally lost the battle.

The mad rush by the trial judge and the EPM, even during a vacation period, has further ended up in a fiasco and a boomerang on them, just as hasty wrestling always lead to a fatal fall.