“By testimony of history – attested and authenticated – the  nanogenerian, Adefaka by his mother, Mama Alademomi, and his children, are direct Princes and Princesses of the Deji of Akure from the Ojijigogun Ruling House. So, this has been rung to the ears of every living human element that The Adefaka Family also own the Deji of Akure’s Palace like others do.”

Former banker of the defunct Cooperative Bank and Trust Bank, Alhaji Kasumu Yesufu Adefaka, is celebrated as he clocks 90 today Sunday May 24, 2020.

The Galadima of Akure was born May 24, 1930 to the two royal royalties of Abibiri Ruling House of Isolo of Isolo Akure, by father’s side, and Ojijigogun Ruling House of Deji of Akure on the side of his mother.

Although there is no partying, as Islam does not support celebrating but marking birthday with prayers and giving out with the mind of thanking Allah and having his rewards, members of The Adefaka Family in Lagos, Ondo, Edo an across Nigeria, led by the eldest child, Mr. Saliu Babatunde Adefaka, woke up as early as 5am this Sunday morning and stepped on to the family platform to e-celebrate the patriarch of the royal family to the joy of all.

Calls and messages from personal friends of the nanogenarian and colleagues, friends of his children from the business, Nigeria Immigration Service, Nigeria Police Secondary School, Journalism, medical sector and the National Youth Corps Service (NYSC), Nigerian Army,  have been pouring into the family contacts since early today.

Alhaji Adefaka, who finally retired from public service as senior official of the defunct Ondo State Cooperative and Marketing Union (OSCMU) in 1983, is a notable figure in the Abibiri Ruling House and will continue to be remembered for dodging to mount the throne as Oba Osolo of Osolo Akure, Ondo State, preferring to travel to Saudi Arabia for Hajj in 1978. He had his reasons in fetish nature of monarchy system in the Yoruba race but rather nominated his younger cousin from woman in the Abibiri royal lineage, the popular Engr. Kayode Oluwatuyi, who retired as director from Federal Ministry of Works and became a construction company chief.

Oluwatuyi, however, surmounted years of court case to be be presented his Staff of Office by the administration of Governor Olusegun Agagu, in August 2005. 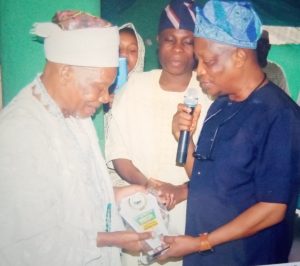 90TH BIRTHDAY: From Left: Galadima of Akure, Alhaji Kasumu Yesufu Adefaka, being presented an award of honour by Ondo State Commissioner for Health, Dr. Abdulwahab Adegbenro, during an Ansar-Ud-Deen Society of Nigeria event in Akure, Ondo State, on 17 December 2017.

Pa Kasumu is grandson of Sanni-Ere, who travelled to a community in the present day Kogi State, North Nigeria and returned with his new wife and mother of Muhammad Raji Kewuyemi, Amuda Bashiri, Muhammed Idera and other who became Imam of Isolo. Father of Adefaka, Yesufu Apoti and former Galadima of Akure, was eldest child of Sanni-Ere, who was one of the figures through whom Islam entered Akure particularly Isolo Town and, upon his return from Northern Nigeria, he converted Apoti, former masquerader, and his sons particularly Adefaka and his siblings including Aliyu, Disu Ilemobola, (father of AbdulHakeem Ilemobola), Abdulkareem and their only female sister to Islam and gave Adefaka Muslim name, Kasumu.

For once, one had got to realise that Pa Adefaka, who in his days was lesson teacher to now known former Secretary to the Government of the Federation (SGF) Chief Olu Falae, and a long time progressive aburo to Afenifere Leader, Chief Reuben Fasoranti, has a history and thatothat has given his 23 children an edge in the bigger Abibiri Royal Family in Isolo, making the proud sons and daughters of The Adefaka Family that is a very highly commendable and formidable one.

By testimony of history – attested and authenticated – the  nanogenerian, Adefaka by his mother, Mama Alademomi, and his children, are direct Princes and Princesses of the Deji of Akure from the Ojijigogun Ruling House. So, this has been rung to the ears of every living human element that The Adefaka Family also own the Deji of Akure’s Palace like others do. The Adefaka’s mother, Alademomi, who died mid-1980 and buried in front his 45 Isolo Street, Isolo, Akure, Ondo State home was direct daughter of the brother (younger or elder) to a former Deji Ojijigogun.

All wish His Royal Highness Prince Kasumu Yesufu Adefaka a Happy 90th birthday anniversary which has coincided with Eid-el-Fitr today Shawwal 1, 1441AH equivalent to Sunday May 24, 2020.