When you have university products that are morally and academically excellent, you will have good leaders in position of authority who will rule or govern with the fear of God and then they will not corruptly enrich themselves because they know that even though they do not see God, surely, God is seeing them.

Crescent University, Abeokuta (CUAB) is one of the early private universities in Nigeria and became the first Islamic university in southern Nigeria.  It emerged as a life ambition of Prince Abdul-Jabbar Bolasodun Adesunbo Ajibola (SAN), a former Attorney-General and Minister of Justice and ex-High Commissioner to the United Kingdom.

The man, simply called Prince Bola Ajibola, set out, in December 2005, to replicate his Baptist Boys’ High School disciplinarian experience to groom the youth of today who will in turn emerge as global citizens of tomorrow, hence the idea of the Islamic Mission for Africa (IMA), whose programmes are dominated mostly by education at all levels. To achieve this vision, Ajibola, who was also a judge at the International Court of Justice, established Crescent University.

The mission statement reads: To produce graduates that are morally and academically sound and excellent and not brilliant beasts. And then the question comes as to whether Crescent University, Abeokuta is free or not from the dilemma emanating from issue of drug use and abuse that are sometimes unnoticed but prevalent among students of higher institutions of learning in nations across the world. This led to this reporter’s visit to Abeokuta where it keenly observed the disposition of Crescent, its proprietor, its management staff, students and even its neighbours to the issue. 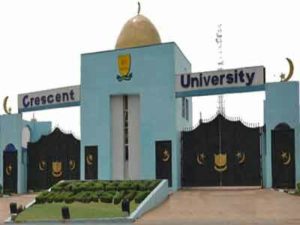 The Proprietor, Ajibola, who, during the visit, bared his mind on the state of the nation, spoke on the attitude of the institution he established now some thirteen years back to wage war against drug abuse, describing it as a menace capable of hindering whatever achievement any university could make of morally and academically excellent students. This, according to him, will not make them to become brilliant beasts.

“In Crescent University our students are tailored towards emerging as global citizens so that in the end they won’t let Nigeria down wherever they go in the world. And to ensure that these aims and objectives are not derailed, we have put all necessary cautionary arrangements in place which is why we train our students to be God-fearing graduating with a degree that is not only excellently achieved academically but also laced with fear of God and moral uprightness. In a nutshell, at Crescent University we produce morally and academically excellent human beings of the status of global citizens,” the former minister said.

Asked to explain what he meant, Ajibola said, “When you have university products that are morally and academically excellent, you will have good leaders in position of authority who will rule or govern with the fear of God and then they will not corruptly enrich themselves because they know that even though they do not see God, surely, God is seeing them and so they will fear Him and instead of diverting state money to their personal pockets, they will use the money to better the lot of the masses by providing basic needs such as good roads, huge investments in agriculture towards ensuring food security, quality and affordable education, quality and affordable healthcare delivery services, security, electricity, potable water and jobs among other necessities of life for the people.

“And when the food items, even products of natural resources are taken to the market, such morally upright and academically excellent graduates who are major distributors of essential needs of mankind such as food, petroleum products will not hoard to create artificial scarcity, which sabotages the very good intention of government to make life easy for the people.”

Ajibola described graduates who are brilliant beasts as the direct opposite of those that are morally and academically excellent in the degree they acquire.

“Those are unemployable. If you give them trust they will betray you. If you entrust the leadership of state in their hands, they will bastardise and won’t even care that they do any evil. They will embezzle state funds with impunity and will be ready to kill and maim anybody under the sky who will block their way of achieving it. 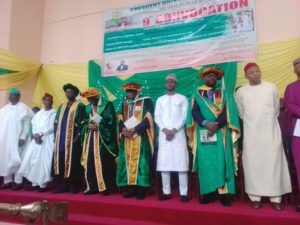 “That is the reason the school knowledge circle matters in achieving a Nigeria of our pride. If you observe us very well, you will see that we take the child that we hope, by the grace of Almighty God, will be leader of tomorrow from crèche through primary, secondary schools to the university. That is our own resolve to wield the truly quality education filled with God-fearing, good moral conduct and sound academic performance as a tool to make Nigeria great.”

Already, the former Attorney-General said, “We are achieving it greatly. We started 13 years ago and now thank God that we are not just saying it but also, we are doing it and we are reaping the fruits of our efforts already.”

Drug matter is a serious matter. It is a life-threatening situation. There is no way drug issue can be dealt with, cured and removed from the university environment except some deliberate efforts are made.

Sometime in the past, Vice Chancellor of the Crescent University, Prof. Ibraheem Gbajabiamila, had said that, “Worldwide, drug issue is a serious issue. Its use and abuse, especially among youths, have brought about so much concern to professionals and institutions. Through Global Citizenship, a specifically designed general study to guide students to be good citizens of the world, Crescent University, Abeokuta is championing a campaign against drug abuse in the institution founded by the former Judge of the International Court of Justice, His Excellency, Judge Bola Ajibola, who himself is an epitome of high moral standing.

“Judge Ajibola, who is also a former Attorney General and Minister of Justice in Nigeria has emphasised it umpteenth times that his university was established on a tripod namely sound academic education, good morals and the fear of God. No doubt the institution prides itself as Citadel of Academic and Moral Excellence. That is what we are in this place.

“And evidences abound that graduates of Crescent University who passed the first degree and had to do their post-graduate programmes in other universities within Nigeria and abroad ended up being commended to the root of their studies that is the Crescent University, Abeokuta which had been represented at their respective graduation ceremonies.

“Example of this includes a product of the university, Rafiat Gawat, a first class mass communication graduate of Crescent University, who went to Robert Gordon University in Scotland on scholarship of Lagos State Government and ended up receiving distinction in the masters degree that she meritoriously acquired”.

On drug checks on students 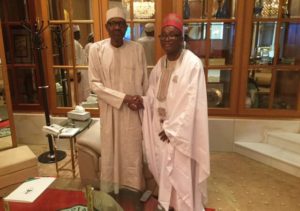 President Buhari and VC Crescent University Abeokuta, Prof. Ibraheem Gbajabiamila, when he visited the President Villa, Abuja ahead of 2017 convocation.

Gbajabiamila went on, “At Crescent University, all hands are on deck at ensuring that our students are monitored and discouraged on abuse of drugs. The rules are there in black and white. Taking of hard drugs attracts punishment such as suspension or dismissal. And as a proactive measure, the University Task Force was put in place years back by my office to monitor students closely.

“Section 12 (13) of Students’ Information Handbook of the university states inter alia, ‘Any student found in possession of dangerous and offensive instruments/substances, without evidence of prescription, will be expelled from the university.’ The dangerous and controlled substances include ketamine, amphetamines, cocaine, heroine, tobacco, alcohol, Indian hemp, volatile solvent like petrol and so on”, the VC explained.

University clinic as an effort

Health professionals are on hand to provide essential services and conduct tests regularly. The university clinic took off with a head in its Director of Medical Services, Dr. Maryam Oladipo, and is charged with these professional responsibilities.  When contacted in the past, Oladipo said, “Students can be selected at random for drug testing at any time as this keeps them on their toes that Crescent University has zero tolerance for drug abuse, which in most cases are contacted through peer pressure.”

According to the medical director, new students are lectured at orientation while all students are routinely lectured by invited consultants from Neuropsychiatric Hospital, Aro,Abeokuta.

Although the Crescent University has adequate arrangements on ground which ensure that students tilt more towards being of good moral in pursuance of their academic studies than having the time to engage in illicit activities, it is still part of the responsibilities of the institution’s management to do the needful in areas of prayers and counselling by guidance counsellors and university Imams.

Parents get progress reports with regard to the school’s efforts on zero tolerance for drug abuse so much so that even parents that have no children in Crescent University but who heard about the brilliant efforts being made in this direction now visit from neighbourhood and bring their children whom they suspect for drug tests at the university clinic. 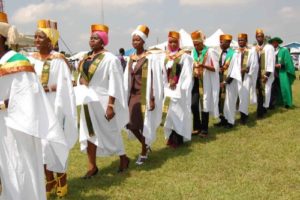 Some of Crescent University’s graduands file up in a procession for the commencement of one of the convocations in the past.

If tested negative, “great” but if tested positive, “the Crescent University Clinic has laboratory equipment that is capable of telling the quantity of drug used, since when and how.”

The University medical director and her team are always on ground in the clinic, to offer consultancy to affected person but whoever is discovered to have fallen in the act is not fit to remain in Crescent University.

That is the school’s point on drug abuse. It was also learned that the university had even concluded now to make drug test part of tests to be conducted at the point of entry so that any prospective student found wanting is denied admission.