President Muhammadu Buhari says one of the things that gladdens his heart in the three years of his Administration is the fact that nations of the world now cooperate with Nigeria to tighten their laws in ensuring that Nigeria’s stolen money be safe in their land while the thieves will be made to face justice.

President Buhari said this while commissioning the newly completed building that is the Headquarters of the Economic and Financial Crimes Commission (EFCC), in Abuja, on Tuesday. 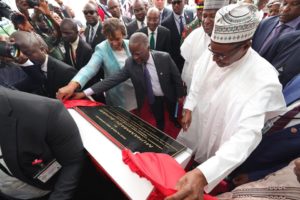 This is the first time the EFCC will be having a building that it can now call its own and, incidentally, it happened under the watch of Buhari Administration.

The President said government was committed to working with its foreign friends to stop the inflow of stolen funds from Nigeria into their countries and recovering what is there already.

He added that when repatriated, the assets would be put to building the country’s infrastructure at home.

The commissioning was attended along with the President former President of South Africa Thabo Mbeki, Secretary-General of The Commonwealth, Ms Patricia Scotland, Nigeria’s Speaker of the House of Representatives, Governor of the Central Bank of Nigeria (CBN), Mr. Godwin Emefiele, and, of course, the Acting of the EFCC, who is a Police Commissioner by rank, Mallam Ibrahim Mustapha Magu.

Although the Senate President, Dr. Abubakar Bukola Saraki, had paid a surprise visit to the EFCC edifice a couple of week ago during which he described the Magu’s effort as fantastic, he was conspicuously absent at the commissioning of the EFCC Headquarters by President Muhammadu Buhari, on Tuesday. 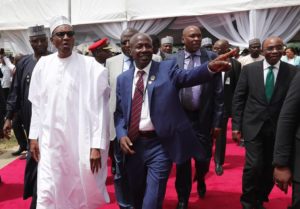 Enthusiastic Magu points attention of the President to something of interest during the ceremony.

It would be recalled Saraki has been accused of frustrating the anti-corruption war of the Buhari Administration by having permanently killed the two Bills to strengthen the crusade sent to him by the President since December 2015.

Saraki’s Senate, it is also said, has continued to frustrate the crusade by ensuring that Magu is not confirmed as substantive Chairman of the EFCC.

Read details of the President’s speech at the event as follows:

SPEECH BY HIS EXCELLENCY, MUHAMMADU BUHARI, PRESIDENT, FEDERAL REPUBLIC OF NIGERIA, AT THE COMMISSIONING OF EFCC HEADQUARTERS IN ABUJA, TUESDAY, MAY 15, 2018

This is another milestone in our determined and collective fight against corruption.