Immediate past Speaker of the Nigeria’s House of Representatives, Rt. Hon. Yakubu Dogara, has again dumped the Peoples Democratic Party (PDP) for the ruling All Progressives Congress (APC). 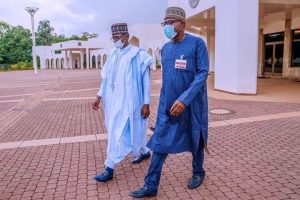 Announcing the development to State House correspondents on Friday, the Chairman of the APC Caretaker/Extraordinary Convention Committee and Governor of Yobe State,, Mai Mala Buni, said the President, Muhammadu Buhari, was happy seeing Dogara return to the party.

Dogara, alongside former President of the Senate, Bukola Saraki, and some governors had left the APC for the PDP ahead of the 2019 general elections.

But Buni led him to a meeting with Buhari on Friday to announce his return to the APC.

Dogara, who is still a member of the House of Representatives, however, refused to speak with State House correspondents.

Buni told reporters that they were at the Presidential Villa for a courtesy visit to the President in continuation of their efforts to rebuild the party and to brief him on developments in the party.

When reporters talked about people expressing surprise that Dogara accompanied him to meet the President, Buni said, “They shouldn’t be surprised because the former Speaker is a member of the APC and it is because the reason why he left the APC is no more there.”

When asked to be specific if Dogara has returned to the party, he said, “Yes, he’s back.”

The Yobe governor, who succeeded Chief Victor Giadom as Chairman of APC, further revealed that Buhari was happy with the development.

“He (President Buhari) welcomed him. He is happy with the development. That is what he’s looking for.

Buni disclosed that members of his caretaker committee are meeting all aggrieved members, particularly those who are interested in returning to the party.

Some of the observers, who expressed happiness over Dogara’s return to APC, called in the leadership to consider reconciling the “doing-well Governor Aminu Waziri Tambuwal of Sokoto State and other aggrieved former APC members with the party and bring them back home.