One of the Muslims that saw Malcom Omirhobo display in court simply said, “Alhamdulillahi. Now we know that those, who have been calling for our heads and Christian Association of Nigeria (CAN) refused to separate them from the Christian Community it heads, are now being seen to be occultists acting within the Christian fold.”

All along, human rights lawyer, Malcom Omirhobo, has been counted to be a Christian lawyer as, in Nigeria, people have appeared officially either as faithful of Islam or Christianity.  But we are yet to get confirmation of him as a registered member of Christian Lawyers Association of Nigeria just like there is the Muslim Lawyers Association of Nigeria (MULAN), being the only two religious lawyers’ associations existing in Nigeria defending the rights of their individual members and standing behind members of their respective religions in same regard.

Suddenly during the week, precisely on Thursday June 23, 2022, Barr. Malcom Omirhobo stormed a Supreme Court session in a full regalia of an idol worshipper otherwise called traditional worshipper in what was ostensibly orchestrated to be his disapproval of approval by the highest judicial decision making body in Nigeria of Hijab as fundamental right of female Muslim student in public schools in the country.

Ironically, Omirhobo, who openly protested the Muslim female rights to use Hijab as displayed in his attitude and comments, is a known human rights lawyer but has never been known to be a occultist as now shown on Wednesday.  But many who were perturbed by his attitude had their tongues wagged as to what human rights the learned personality claims to defend if he does not recognise that Muslims (and not only non-Muslims where he belongs) deserve the rights to be defended and protected by him.

It will be recalled that in a Bashir Adefaka’s WAKE Up column article titled “The only path to peace in Nigeria is to ‘live and let live’”, published by The DEFENDER, it was clearly stated why professionalism is not the meaning of denial of religion but doing justice to all sides. 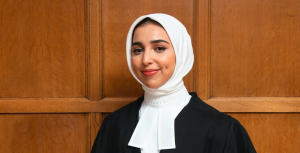 Example of a female Muslim lawyer appearing in Western court.

It thus became an eye-opener why, for a long time, the Muslims, especially Muslim girls in publicly owned and funded schools particularly South West Nigeria, have had to bear through deprivations, religious doctrine impositions and persecutions over their rights to religious manifestation and, despite the increased number of human rights lawyers like Malcom Omirhobo, their plights have been seen and confirmed by those rights fighters but they pretend like they do you see how those Muslims are persecuted.

There was a particular case of a 12-year-old JSS3 student in a Lagos school, who was given 43 strokes of cane by Christian principal of her school on allegation that “yesterday” she saw her after school hours wearing Hijab on her school uniform. Muslim Teachers Association in Lagos protested that maltreatment, no single human rights lawyer like Omirhobo came to the rescue of that innocent girl, who later emerged the best in mathematics of WAEC results, three years after this time under Governor Akinwumi Ambode, and the governor selected to honour her wearing her Hijab. That proved wrong anti-Islamists who claim that Hijab blocks student’s brilliancy faculty.

Constitutional Lawyer Malcom Omirhobo, barely six days after the Supreme Court confirmed the rights of Muslim female students to use Hijab in public schools and which by implication covers all Muslim women anywhere in Nigeria, came to the apex court in the attire that unnecessarily drew media attention and suddenly described himself as a traditionalist.

He said he was motivated to appear in court in the unusual attire by last week’s judgement of the Supreme Court affirming the rights of Muslim female pupils to attend school in Hijab in Lagos public schools.

Subsequently on the said day, Omirhobo attended proceedings at the Supreme Court dressed in a occultist attire with white chalk-drawn around his right eye, feathers stuck to his legal wig, cowry bracelets around his wrists and a string bearing a gourd laced with cowries dangling on his chest.

On top of it all, he wore the toga of his legal practice over a white inner shirt but tied a red wrapper around his waist as a replacement for grey trousers he would ordinarily have worn to court as a practicing lawyer and walked in and out of the court barefooted while the two yellow bell bracelets tied around his two ankles dangled to the notice of anyone around.

His behaviour that Thursday made some Muslims feel vindicated, aside Christian Association of Nigeria (CAN) that is known for pursuing anti-Islamic agenda in Nigeria under full funding and moral support of the West, it is strange to see a Christian who will hate to see Muslim appear as one or block him or her from accessing any benefit where he (Christian) has power of management if he is true Muslim.

Prophet Muhammad (Peace be upon him) would command the troops of Islamic Army Command under the Islamic World he headed to go and support the Christian Army under the Roman Empire, both two of three World Powers at the time, against the third world power and fire worshipper, Persian Empire, which was always threatening the peace of the Christian World.

One of the Muslims that saw Malcom Omirhobo display in court simply said, “Alhamdulillahi. Now we know that those, who have been calling for our head and Christian Association of Nigeria (CAN) refused to separate them from the Christian Community it heads, are now being seen to be occultists acting within the Christian fold.”

Lawyer Malcom said, “I have been missing all along until the Supreme Court gave the judgment on Friday (June 17, 2022).  I interpreted the judgement as a decision that guarantees our rights under Section 38 of the constitution,” he said in an interview with Channels Television after the Thursday’s proceedings.

He said if the school pupils can wear hijab, the mode of their worship, to school, any attempt to stop him to appear in his faith’s attire would amount to a violation of his fundamental right.

“I felt confident to appear at the Supreme Court in my religious attire of worship and any attempt to stop me from dressing like this will be a violation of my right, freedom of thought, conscience and religion,” he added.

Omirhobo, whose pictures of him seated with his unusual attire in court have circulated online since on Thursday, said he attended court as an amicus curia “a friend of the court” and to observe proceedings.

“I had a nice time in court before my lords,” the lawyer said, adding that the Justices of the Supreme Court were pleased with his dressing.

“I went there and sat before my lords, and they were pleased with my appearance until they have to reconstitute,” he said.

Omirhobo said the attire would be his mode of dressing to court in all his future appearances and ensure his children also dress to court in the same way.

He expressed his gratitude to the Supreme Court and encouraged the police, those in the Army, the Navy, doctors and others to also dress in their mode of religion in their places of work.

He however did not state if such dressing will be the all-event attire of him and his family as Hijab is inseparable from the dressing of a Muslim who has chosen to wear it.

In the meantime, Muslims have expressed their less concern about the attitude of the lawyer as they say, the law of nature know who is right and who is simply being hypocritical but that the Supreme Court has done what is right for the female Muslims who have proof from their Holy Book, Qur’an, to their wearing of Hijab.

They, however, noted that the likes of Malcom Omirhobo, who chose to mock the Muslims over their rights being affirmed by the highest court in the land, will have to convince authorities with proof of what they are calling their “faith dress” as their protests against Hijab continues in the future.

“To me, it Omirhobo’s choice to do what he did.  Even the Supreme Court of any country knows that anyone that must lay claim to a religious right must be able to prove its origination from God the creator of heavens and heart. Otherwise, their hypocritical display will only merely be an effort in futility because it does not change anything from what Muslims are commanded by their Lord to enjoy,” one of them said.

Omirhobo’s action put him upon as being out for a “mischief” because, according to our investigations, he has been a Nigerian lawyer before July 2018 when Muslim Rights Concern (MURIC) won case that made the Nigerian Law School reversed its decision disallowing the use of Hijab by female Muslim lawyer on uniform.

Recall that back in December 2017, University of Ilorin law graduate, Amasa Firdaus, was denied a call to the Nigerian Bar for refusing to remove her Hijab at the call ceremony. Despite instructions and pleas from the Nigerian Body of Benchers as well as her colleagues, she still insisted on wearing the wig on her hijab. As a result, she was denied entry into the hall and subsequently denied a call to the bar.

After a case was filed by the Muslim Rights Concern (MURIC), an Islamic human right group that fought for the graduate’s rights, the Body of Benchers subsequently reversed their decision.

They said in a statement that the Body of Benchers have decided that “Amasa Firdaus can wear a small covering over her hair for the Call to Bar ceremony in July 2018 while they deliberate on a generally appropriate dress code”.

This victory for Firdaus means other law graduates can wear hijab under their wigs at the Call to Bar ceremonies and by extension, needlessly, it has taken no legal provision to allow Muslim lawyers in Nigeria to wear the hijab in court as decision for Firdaus has satisfied all.