More proactive and decisive measures are to be taken by the Federal Government to put an end to the Boko Haram menace in the country once and for all. 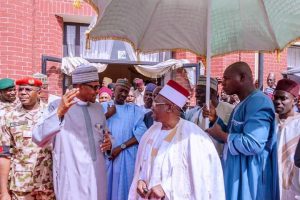 President Buhari at the Palace of Shehu of Borno during the sympathy visit to Maiduguri on Wednesday February 12, 2020.

President Muhammadu Buhari who gave the assurance in Maiduguri during a sympathy visit however maintained that intelligence sharing and synergy between law enforcement agencies and the civil populace were critical towards achieving the objectives.

The presidential assurance was as communicated through a statement issued Wednesday by his Senior Special Assistant on Media and Publicity, Mallam Garba Shehu, copy of which was sent to The DEFENDER.

President Buhari said, “I assure you that improvement in security will be pursued vigorously. The military will work harder and strategise with tactics to deal with the insurgents. This is however not possible without good intelligence and cooperation with local community leaders.

“I want to call on the leadership at various levels to cooperate with law enforcement agencies and let us deny Boko Haram access to our loyal citizens,” the President said.

President Buhari, who was at the palace of the Shehu of Borno, His Royal Highness Abubakar Ibn Umar Gabai, accompanied by the state Governor, Babagana Umara Zulum, sympathised with him and other victims of the attack, prayed for the repose of the soul of the victims.

In his remarks, Governor Zulum thanked the President for identifying with the state in these trying times. He praised the efforts of the military so far, wondering why some people would be comparing the security situation now with what obtained before the Buhari administration came on board:

“Roads were closed, there were sporadic bombings everywhere even within the metropolis. Close to 20 local government areas were under Boko Haram. We are surprised that there seems to be resurgence in 2019.”

He tasked the military to borrow from their successes especially between 2015 and 2017, take the battle to the insurgents and push them to the fringes of Lake Chad.

He also urged the security agencies to be patient with the civilian populace and give opportunities to the Internally Displaced Persons to access their communities in order to return to their occupations.