The Federal Government Nigeria has announced the selective resumption of school classes in the country.

By a declaration from the Federal Ministry of Education on Monday, secondary schools in the country will reopen on August 4, 2020 only for students in exit classes to sit for their examination.

The government announced the decision at the end of a virtual consultative meeting between the Federal Ministry of Education, Commissioners of Education of the 36 states, the Nigerian Union of Teachers, (NUT), the proprietors of private schools, and Chief Executives of examination bodies.

In a statement by the Director, Press and Public Relations, FMoE, Ben Goong, said “stakeholders at the meeting agreed that the exit classes should resume immediately after the Sallah break, from the 4th of August, 2020 to enable them prepare for the WAEC examinations scheduled to commence from the 17th of August, 2020.

“The meeting also resolved that a passionate appeal be made to the Federal Government through the Presidential Task Force on COVID-19 and public spirited Nigerians for assistance to schools across the country to enable them fast track the preparations of safe reopening, as agreed.

Minister of Education, Adamu Adamu, had earlier said that Nigerian schools will not reopen any time soon until it is safe to do so because of the COVID-19 pandemic. He has therefore said that final year students preparing for the Senior Secondary Certificate Examination (SSCE) will not be allowed to return to school contrary to what had earlier been believed.

Addressing State House correspondents after the virtual meeting of the Federal Executive Council (FEC) in Abuja on Wednesday, Adamu stated that the West African Examinations Council (WAEC) cannot determine the resumption date of schools for Nigeria.

He said he would prefer that Nigerian students lose an academic year than to expose them to dangers. He appealed to States that have announced the resumption of school in their states to reconsider their position so as not to jeopardize the lives of the students, adding, “It is not safe to reopen schools now.”

It was earlier reported that Oyo State Government had cancelled the third term for the 2019/2020 academic session for primary and secondary schools.

With the development, pupils are to be promoted based on their academic performance in first and second terms of the suspended session.

A statement by the Commissioner for Education, Science and Technology, Mr. Olasunkanmi Olaleye, said terminal classes pupils, including Primary Six, Junior Secondary School 3 and Senior Secondary School 3, are to proceed on holiday from July 30 and resume for their examination, whose detailed was released in the revised academic calendar.

Below is their revised academic calendar:

“Pry 6, JSS 3 and SSS 3 will proceed on holiday from July 30 and resume for their examination as follows:

“The SSS 3 will resume for their examination as soon as the West African Examinations Council (WAEC) announces the date.

“The 2020/21 academic session, according to the calendar approved by the State Council is as follows:

“The Ministry of Education, Science and Technology enjoins stakeholders and the public to take note of the details of the academic calendar.”

Here at UAP, we are hoping the Federal Government and other state government resumes schools as well. 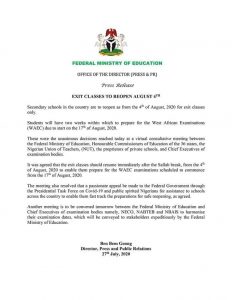 A statement from Ministry of Education also attests.