According to the state governor, he was in the Hajj House to make a request and to exchange pleasantries. 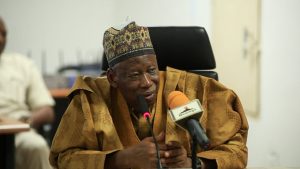 Governor of Kano State, Dr. Umar Abdullahi Ganduje, giving a remarks during his courtesy visit to the National Hajj Commission of Nigeria (NAHCON), Hajj House, in Abuja, on Wednesday June 15, 2022.

Alhaji Umar Ganduje lauded NAHCON Chairman for many initiatives among which is the take-off of the Hajj Savings Scheme, designed to aid low-income earners and others in paying gradually for a chance to perform Hajj. He said Kano state had embraced the scheme right from the start, reason why an enabling environment was created for its success in the state. 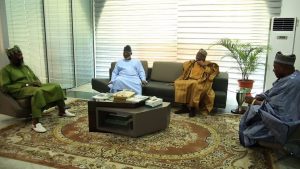 He thanked NAHCON for the functional Hajj clinic built in Kano which the government helped to furnish. His Excellency appreciated the excellent relationship his government is enjoying with NAHCON as well as between NAHCON and other state governments.

Meanwhile, The Executive Governor reminded Alhaji Zikrullah Hassan that work on the hotel like construction has stopped, a situation that might incur additional cost due to constant rise in the prices of building materials. He called for urgent action on the matter. Finally, Alhaji Umar Ganduje requested for additional slots for his state if by chance there is any available.

Alhaji Hassan welcomed the Governor in the Hajj House describing it as historical. He asserted that the governor was the greatest supporter of the HSS and described the governor as receptive to NAHCON leadership. The NAHCON Chairman declared that Kano was the first state where the Commission’s Public Private Partnership scheme begun successfully. He thanked him for that.

Alhaji Hassan also described Kano as important to NAHCON promising to assist Kano with its requests out of respect for the state.

Regarding halting of the hotel building, the NAHCON Chairman blamed financial constraints for the stoppage.

Other dignitaries present in the event were NAHCON’s three permanent commissioners and directors of the commission.