“If Nnamdi Kanu is truly alive as that impostor and his packagers wanted us to believe, we have no problem with that. But he must come down to Nigerian soil, select editors and news directors from NTA, Nation, NAN, The DEFENDER, Leadership, TVC, Channels TV all these we can trust, and his own media allies can also be their but these we believe will not compromise, and then he should present himself live to us. Anything less than this cannot convince us that Nnamdi Kanu is alive,” he said.

The two-week controversies over whether or not leader of Indigenous People of Biafra (IPOB), Nnamdi Kanu, died may have finally been settled as an Italian newspaper headline shows he is actually dead. 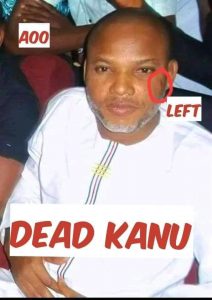 The DEFENDER, which journalism has been restricted to reporting the updates as they emerge, stumbled over the Facebook wall of a trusted patriot and lawyer on Wednesday, who posted the newspaper, il Giornale‘s front page with a standing picture of the “late” IPOB leader under a headline, “Leader Di IPOB Nnamdi Kanu Morto Di Coronavirus.”

Mindful of the prevailence of fake news in particularly Nigerian society of late, it took us having to tarry a while and ask so many questions before we arrived at going to press Wednesday evening, although the post sighted was early afternoon.

Our checks included the use of languages interpreter app to translate the headline from Italian (Italy) to English (UK), that was despite the post author’s assurance that, “In case you don’t speak Italian, …..I do! And this here says: “Leader of IPOB Nnaama Cownu died of Corona baby”!! PS: Hanty Kemi has ‘real sources’ true true! Pix credit: Egondu Okorie” 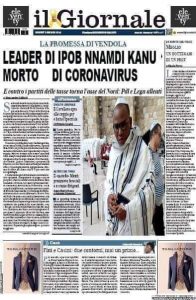 We then got in touch directly with the source, who told us on phone breaking down the language: “Di or Du in Italian means ‘of’ and ‘Morto’ means ‘dies’ or ‘died’. When you now bring the words together, ‘Leader Di IPOB Nnamdi Kanu Morto Di Coronavirus’, you will discover what you seek.”

Still unsatisfied even with enough explanations we had got, we took a step further to get in touch with envoy of Italy in Abuja but to no avail at press time. While that is continuous, many Nigerians with knowledge of Italian have confirmed the translation by our lead source.

It was gathered that Nnamdi Kanu, when allegedly helped by same people who stood surety for him in court mainly a senator of Nigeria’s Fourth Republic to jump bail in escape to London when United Kingdom was still part of Europe, the European countries including Italy have looked the other side as he reigned its nuissance disparaging Nigeria calling it a “Zoo” on their own soil.

The DEFENDER reports that Nnamdi Kanu had also ordered IPOB members in some of the European countries to beat and publicly disgrace Nigerian leaders, example of which they did and videoed of former Deputy Senate President Ike Ekweremadu when he visited Germany to address an Igbo conference.

Ekweremadu had backed IPOB – later declared terrorist organization by competent court – in its reigning days in Nigeria thinking that in doing so the group populated mainly by Igbo youths with a pat on the back by Ohaneze Ndigbo would frustrate the re-election of President Muhammadu Buhari.

Kanu had also ordered, to the watch of those European countries where he moved freely and even operated his Fake News milling medium, Radio Biafra, from, that President Muhammadu Buhari should be “beaten up” taking hooliganism and nuissancy to the extreme, just like he led a loud campaign backed by some local media against the Nigeria’s Leader coming to attend his official events of summit and others in any European country.

With an Italian newspaper said to have published his death coupled with the breaker of the obituary news, Kemi Olunloyo, now coming again to say “since the person claiming to be Kanu could not show his face in the Facebook live broadcast, the man is dead”, and failure of an IPOB meeting addressed by the leader to happen by way of proving that he is truly alive as some people trying to package “an impostor” want the country to believe, all indications remain that the terrorist group leader has actually died.

A source told The DEFENDER Wednesday evening that, “This Nnamdi Kanu case is more complicated than we think but it is simply clear an evidence, even though we are not there in Italy. One, have you ever seen where a dog eats another dog’s  intestianother, as Yoruba’s parlance would say? A man is master of the only known clique of Fake News merchants in Nigeria, tell me who can carry Fake News against such a man.

“Look, you are a newspaper and your publisher is a journalist that we all trust and respect. You don’t join the group of media organisations trying to coverup to say this guy is not dead by hyping that senseless Facebook live broadcast that turned out to be another lineage of fakeness. If Nnamdi Kanu is truly alive as that impostor and his packagers wanted us to believe, we have no problem with that.

“But he must come down to Nigerian soil, select editors and news directors from NTA, Nation, NAN, The DEFENDER, Leadership, TVC, Channels TV all these we can trust, and his own media allies can also be their but these we believe will not compromise, and then he should present himself live to us. Anything less than this cannot convince us that Nnamdi Kanu is alive,” he said.