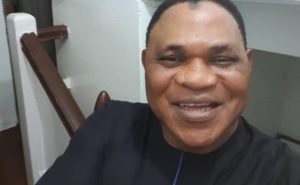 Senator Dino Melaye’s ambition to be the governorship candidate of the Peoples Democratic Party in Kogi state has crashed as he emerged a distant fourth in the result declared today by the election committee headed by Adamawa governor Ahmadu Fintiri.

Wada is thus the candidate of the party that will slug it out with Governor Yahaya Bello in the Nov. 16 election.

Wada’s victory was a huge upset as he beat all the 11 contestants, including the former governor, Idris Wada, who came third with 345 votes.

Abubakar Ibrahim, was the one who gave Wada a big chase as he got 710 votes to come second.

Melaye beaten to the fourth position

There were sour grapes thereafter.

Melaye expressed dissatisfaction with the conduct and the outcome of the election.

He claimed that the winner was allowed to bring over 600 votes from his house which, he said, the committee accepted and counted in his favour.

Melaye, who spoke through his agent, Mr Femi Obalemo, said that he would appeal the decision of the committee.

Also speaking, Ibrahim, who came second, said that the winner defeated him with 38 votes, which, he said, was less than the missing 247 ballot papers.

He expressed the confidence that if the missing ballot papers could be recovered, he would emerge the winner.

Sorting of the ballots cast on Tuesday was being done when gunmen disrupted the election, although the party later claimed that the disruption did not affect the election.

Fintiri, the election chairman however acknowledged that 247 ballots were missing after the disruption. He said the missing ballots were not enough to affect the integrity of the result.

The committee chairman said that he decided to announce the results, having been satisfied that the conduct of the primaries had complied substantially with the provisions of the party’s constitution.

“We have performed well and we should be commended by all the aspirants,” the governor said.

He said that 2,388 delegates were accredited for the election while 2,109 votes were cast. He also said that 54 voided votes were recorded, with 244 unused ballots.

He added that any aggrieved aspirant was free to lodge appeal with the national secretariat of the party.

Wada, who was declared winner, appealed to other contestants to accept the result in good faith and in the interest of the party, promising to carry them along in all the processes leading to the real election.