The Delta State Commissioner of Police, CP) Ari Muhammad Ali, alongside Hon David Towe, Director General on Security to Delta State Government, visited Ughelli North to see the trucks set ablaze along East-West Road, as people protested against the Economic and Financial Crimes Commission (EFCC) in the area on Wednesday.

The CP and his team were received by the Chairman of the Ughelli North Local Government, Hon Chief  Godwin Adode JP. 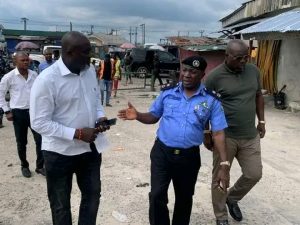 The chairman called on the youths of Ughelli to work with him, urging them to always reach out to him whenever they hear anything about EFCC, a better approach he prefers to taking the law into one’s hand.

The Ughelli North Council boss was accompanied by Secretary to the Local Government, Hon Felix Oderhohwo , Supervisory Councilor on Works,  Hon Emoefe Ediri Peace , amongst others.

The DEFENDER’s Correspondent, who was on ground at the visit of the Commissioner of Police, gathered that Tuesday’s protest embarked upon by youths at Otovwode Ughelli against the operatives of EFCC in Delta State turned violent and bloody, after they had been complaining about incessant harassment, molestation and arrest by officials of the anti-graft agency.

It will be recalled that from this same Otovwodo Ughelli #EndSARS started in October 2020 leading to several deaths and many sustained injuries.

As the latest protest turned violent, over 20 trucks were said to have been set burnt with goods worth several millions of Naira.

The protest, which caused serious commotion and panic in the Local Government, took place at the Otovwodo junction of Ughelli community, Ughelli North Local Government Area of Delta State.

It was, however, alleged that the protesters included suspected internet fraudsters, popularly known as ‘Yahoo Boys.

The DEFENDER gathered from the Delta State Police Public Relations Officer (PPRO), DSP Bright Edafe, that one person was killed in the protest while two who sustained injury have been rushed to the hospital.

He confirmed the burning of 20 trucks with goods carrying various goods and materials and added that 15 persons were arrested.

The victims are currently in a life-threatening condition at an undisclosed hospital in the area where they were taken for treatment.

They displayed placards with different inscriptions such as “#EndEFCC”, “EFCC, leave us alone, we are not criminals”, and “Stop the harassment, molestation, intimidation and indiscriminate arrest”.