*Vows to go after killers, as President begins visit to crisis areas

…More towns in Mambilla under attacks

President of the Federal Republic of Nigeria, Muhammadu Buharu, expressed his sadness over the alarming rate of killings on the Mambila Plateau, Taraba State, as he began on Monday his planned visits to the crisis-ridden communities in the five states of the country. 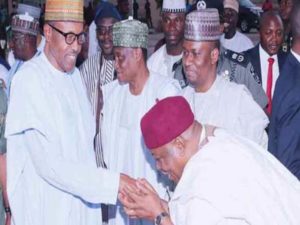 President Buhari said the perpetrators of the killings and destruction on the Mambilla Plateau and other places would be arrested and prosecuted.

Speaking in Jalingo, the President, who said he was in the state to condole with the government and those who lost their loved ones during the violence, promised that justice would be done to all over the ugly developments.

The visit, which took off in Taraba, will also take him to Benue, Yobe, Zamfara and Rivers states where scores of people were killed in communal and cultism violence in recent times.

The President stated this during a stakeholders meeting between the Fulani and Mambilla ethnic groups at the Government House Jalingo.

He was alarmed by the fact that the number of people killed on the Mambilla Plateau, Sardauna Local Government Area of Taraba, was more than those killed in Zamfara and Benue states combined.

Describing the attacks leading to wanton destruction of lives and property as unfortunate, the Nigerian Leader explained that relationship between members of a community should not be left to government alone but should also be the duty of the traditional institutions to ensure peaceful coexistence among their people. 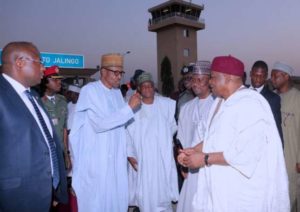 Governor Darius Ishaku’s inaction had been blamed for massacre of over 700 Fulani people on Mambila plateau before the fresh killing of another 20 that occurred again on Sunday where hundreds of cows were also stolen by people identified to be members of the Mambila Militias believed to be agents of governments in the Taraba and Benue axis.

But in his speech, the Taraba State governor said his administration would do everything possible to ensure that peace was maintained in the state.

He also assured President Buhari that the traditional institutions and leaders of Sardauna Local Government would be mobilized to work together to speed up the take-off of the Mambilla Hydroelectric Power Project in the area.

President Buhari was accompanied by Service Chiefs, Ministers of Information, Defence and Women Affairs as well as some members of the National Assembly from the state.

It was gathered that Maisamari, Yelwa, Tunga and Kassa Sa villages were attacked on Sunday and several persons killed.

Reports have it that several houses and vehicles were sighted burning during the Sunday’s fresh attacks of Fulani communities on the Mambila plateau. 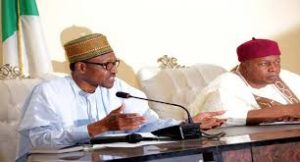 President Muhammadu Buhari and Governor Dairus Ishaku on the talk-table in Jalingo on Monday.

The injured were said to have been taken to General Hospital Gembu while police and relatives of those killed were searching for dead bodies.

The road leading to Jalingo from the area was also blocked for several hours by the attackers until around 3pm when a team of soldiers and police cleared the roads.

At Kassa Sa village located few kilometres from Kakara Tea company which was attacked by suspected Mambilla militias, four people were killed and about 20 others still missing.

A leader of the village, Mallam Aliyu Mohammed, told a reporter that the attacks were unprovoked as there was no dispute with those that attacked  their community.

He said one vehicle, two motorcycles and other properties worth millions of naira were burnt by the attackers.

Reports also have it that additional police and soldiers were also sighted arriving the area at about 5pm while the atmosphere was tense in the entire Mambilla plateau even as hundreds of people had fled the area.

The Fulani community in the area alleged that attacks being launched by Mambilla militias against them were supported by some key politicians and elite.

A prominent member of Fulani community in Mambilla plateau, Ardo Yakubu, alleged that the militia were supported and protected because up till now no single person was arrested and prosecuted for the atrocities they committed.

They appealed to the Federal and Taraba state governments  to urgently deploy more security to protect lives and property in the area.

One of the Fulani leaders, Alhaji Bello Shadari, made the appeal during a press interview in Gembu adding that there were many Fulani communities being attacked across the area on daily basis.

He said most areas were inaccessible by security due to difficult terrain and the attackers were taking this advantage.

Shadari said within the last five days about 30 Fulani communities around Kakara, Leme and  Yarimaru were attacked.

He said in one community about 20 persons were missing following  Mambilla militia attack,  adding that the missing persons were still being searched for.

The community leader blamed the continued attacks on the community on the failure of relevant authorities to arrest perpetrators and prosecute them.

He said the crisis in Yelwa and Maisamari on Sunday was as a result of killing of three elderly Fulani by Mambilla.

The community leader commended the effort of both army and the police and other security agents for working toward restoring peace and called for posting of security agents into the hinterland to prevent attacks on innocent persons.

The Taraba police spokesman was reported in a leading national newspaper to have said that the attacks were ethnicity based caused by a land dispute and that four people were killed on both side.

However, another national newspaper, which said its reporter spoke with the state police spokesman on phone, reported the same police spokesperson, ASP David Misal, to have said that he would not say anything on the issue, adding that “we are in the field waiting for the arrival of Mr President. I can’t comment on this issue now.”

The National Commission for Refugees, Migrants and Internally Displaced Persons (NCFRMI) has distributed 406 cows and assorted relief materials  worth millions of Naira  to victims of  June 2017 Mambilla attacks.

Presenting the relief materials to the victims in Gembu, headquarters of Sardauna Local Government Area yesterday, the Refugees Commissioner, Hajiya Sadiya Umar, said the commission was worried over  the plight of the displaced persons  and  the items provided was intended to reduce their sufferings.

Represented by Director of Procurement in the Commission, Alhaji Jibril Wada, the commissioner said before coming to Taraba, the commission, in continuation of its 2017 intervention flagged off the 2018 exercise in Kebbi, FCT, Nassarawa, Edo, Benue and Bauchi State.

She observed that the commission took cognizance of the disturbing humanitarian crisis that erupted on the Mambilla plateau with available statistics indicating that about 351 persons were killed, 381 people went missing, and over 20,000 cows killed or stolen.

Hajiya Sadiya stated further that it was also disturbing to note that about 483 houses or settlements were razed down during the attacks.

The  commissioner also  disclosed that  the cows donated was  aimed at restocking the herds of the victims, adding that the commission also  donated 308 sprayer kits, 308 cartons of pesticides, 308 cartons of Herbicides and 400 units of Grinding Machines mainly for widows.

She stated that the commission had also donated hygiene and care material for women and children as well as assorted drugs for maternity and dispensaries in the affected areas.

She appealed for peace and assured that the commission would continue to support the vulnerable people and ensure they return to their homes to continue with their normal lives.

The Wakilin Fulani Alhaji Saidu Bawa, in an address on behalf of the beneficiaries, appealed to the commission to reconstruct destroyed homes and rehabilitate nomadic schools destroyed during the attacks.