He was until his death in the early hours of Wednesday 2nd October 2019 the deputy in charge of Southern Nigeria assisting yhe Sultan of Sokoto, who is President-General, in the administration of the NSCIA. 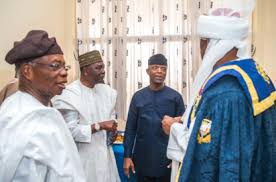 Popularly called S. O. Babalola, the Officer of the Order of the Niger (OON) was till death pioneer President of the Muslim Ummah of South West Nigeria (MUSWEN) with Ibadan as its headquarters.

Balogun added: “May Allah be pleased with Baba and admit him into Al-Janah Firdaus.”

In the meantime, effort to get to the Sultan of Sokoto, Alhaji Muhammad Sa’ad Abubakar, who just returned to the country from a United Kingdom trip to which he traveled after delivering the Ulefunta Public Lecture 2019 in Akure Ondo State, for his reaction was yet successful as at the time of filing this report.

A Sultan’s Palace source in Sokoto however confirmed he had received the shocking news and would make his reaction when he chose to. 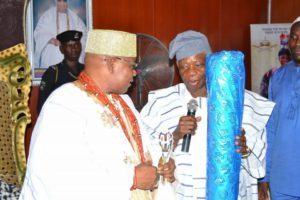 Late S. O. Babalola presenting a gift to Deji of Akure, when he had a stop over in Akure enroute Aiyede Ekiti, representing the Sultan of Sokoto as guest of Attah of Aiyede Kingdom, Ekiti State, on Friday August 14, 2016.