Nigeria’s Dr. Ngozi Okonjo-Iweala has been appointed as the first female and first African head of the beleaguered World Trade Organization (WTO) with her confirmation on Monday.

Upon her confirmation, the former Nigeria’s Minister of Finance and Coordinating Minister of the Economy said a stronger WTO would be vital for the global coronavirus recovery.

The international trade body, having promised to convey quickly following withdrawal of United States candidate, called a Virtual Special General Council meeting at which member states officially selected the Nigeria’s candidate and World Bank veteran as the new Director General of the WTO.

She will take up her post on March 1, 2021 and her term, which is renewable, will run until August 31, 2025.  The near-paralysed institution desperately needs a kick-start — something Okonjo-Iweala immediately addressed after being confirmed in the job.

“A strong WTO is vital if we are to recover fully and rapidly from the devastation wrought by the Covid-19 pandemic,” the 66-year-old economist said in a statement.

“I look forward to working with members to shape and implement the policy responses we need to get the global economy going again.

“Our organisation faces a great many challenges but working together we can collectively make the WTO stronger, more agile and better adapted to the realities of today.”

Buhari’s push from the beginning 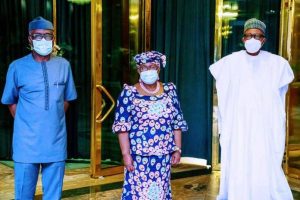 From Right: President Muhammadu Buhari, Former Minister of Finance and Coordinating Minister of the Economy, Dr. Ngozi Okonjo-Iweala, and the Minister of Commerce, Trades and Investments, Otunba Niyi Adebayo, when the President received Okonjo-Iweala in State House promising to ensure her emergence as DG WTO, on Monday 12th October 2020.

Okonjo-Iweala was announced by President Muhammadu Buhari as Nigeria’s nominee for the position of Director-General of the World Trade Organisation on June 5, 2020 following withdrawal of the candidacy of Yonov Agah, the country’s permanent representative to WTO, from the same position earlier made by the President. The election was scheduled to hold in Geneva, Switzerland this 2021 for a four-year term that would run from 2021 to 2025 after former Director-General of the organisation, Roberto Azevedo, stepped down a year to the end of his second term.

“The embassy of the Federal Republic of Nigeria and permanent mission to the African Union and United Nations Economic Commission for Africa present compliments to all embassies and permanent missions in Addis Ababa and has the honour to inform that the Federal Government of Nigeria has withdrawn the candidacy of Ambassador Yonov Frederick Agah for election to the position of director-general of the World Trade Organisation.

“Nigeria is therefore pleased to request the support of esteemed AU member states as well as permanent missions and embassies in Addis Ababa in favour of the candidacy of Okonjo-Iweala,” a letter replacing Nigeria’s earlier nominee with Okonjo-Iweala reportedly stated as captured by The DEFENDER.

On October 12, 2020 in a report titled, “WTO: We’ll push, push until you win, President Buhari assures Okonjo-Iweala”, President Muhammadu Buhari gave her the confidence that the country will explore every opportunity and deploy its entire energy to ensure that she would become the Director-General of international trade body.

President Buhari said: “I assure you that we will do all that we can to ensure that you emerge as the Director-General of WTO, not only because you are a Nigerian, but because you are a hardworking Nigerian. You deserve this,’’ he added.

The President assured Dr Okonjo-Iweala that he will make more phone calls, and send letters to some world leaders for more support.

“I did the same for Dr Akinwunmi Adesina for President of the African Development Bank. Both of you served the country under the Peoples Democratic Party (PDP). You are both highly qualified. We will continue to support you. I will immediately make those calls,’’ the President told Dr Okonjo-Iweala.

Dr. Ngozi Okonjo-Iweala’s only challenger, United States President Donald Trump despite his effort to block her from becoming Director General of World Trade Organization (WTO), was defeated when on October 20, 2020 she scaled through the third and final hurdles in her bid to clinch the position, security majority support among the 164 member countries of WTO.

At the centre of the heart of President Muhammadu Buhari had been that Okonjo-Iweala should be DG of WTO and he had never wavered in his commitment to ensuring that and his integrity was commended by many particularly the Buhari Media Organisation (MBO) as winning goodwills globally for the country.