It is now no longer at ease for Boko Haram terrorists and other radicals sharing in their alien ideology as troops of Nigerian Army continue to dominate the theater of war, causing them devastating consequences. 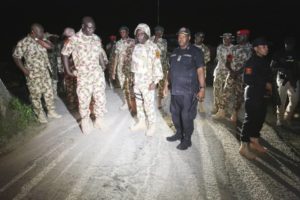 This is as yet another outing, in the final effort to end their activities in the country, ended up in huge success leading to heavy casualties at the weekend, on the part of the radicals.

In a latest release by Acting Director of Army Public Relations (DAPR), Colonel Sagir Musa, sent to The DEFENDER Sunday night, the operation was carried out by troops on patrol along Monguno-Mairari-Gajiram axis in the North East part of the country.

Colonel Musa said, “Troops of Sector 3, Operation LAFIYA DOLE attached to Super Camp Monguno on Friday 30th August 2019 while on patrol dealt a devastating blow on Boko Haram terrorists along Monguno-Mairari-Gajiram axis. The patrol team came in contact with the terrorists and engaged them with heavy volume of fire that neutralized countless number while a few escaped with gun shot wounds going by blood trails in the general area.

“The gallant troops also recovered some weapons and equipment from the terrorists. 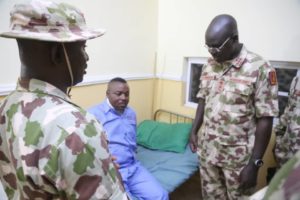 General Buratai during a visit to injured but still highly motivated troops in hospital.

“The wounded are being treated and are in stable condition. The highly motivated troops have continued combing the general area with a view to clear remnants of hiding terrorists.

“The Chief of Staff, Lieutenant General TY Buratai, along with some Principal Staff Officers from the Army Headquarters, Theatre Commander Operation LAFIYA DOLE and other Commanders, have visited the troops and those wounded in action,” the Army Spokesman explained.