Beijing will impose “reciprocal restrictions” on all American diplomats in China in response to earlier curbs on the activities of its embassy staff in the United States, China’s Ministry of Foreign Affairs has said.

The unspecified countermeasures will apply to all US embassy and consulate staff, as well as the consulate-general in Hong Kong, a ministry statement said on Friday.

“To urge the US to repeal its wrong decisions as soon as possible, the Chinese side has recently sent a diplomatic note announcing reciprocal restrictions on US embassy and consulates, the consulate-general in Hong Kong included,” it added.

The announcement comes days after China threatened to respond to a new raft of US restrictions on Chinese diplomats, such as a requirement to seek approval for university visits, holding cultural events with more than 50 people outside embassy grounds, or meetings with local officials. 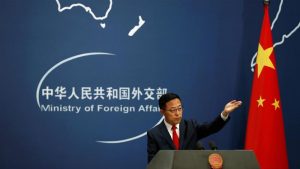 The unspecified countermeasures will apply to all US embassy and consulate staff and the consulate-general in Hong Kong, a ministry statement said [Carlos Garcia Rawlins/Reuters]

Last week, US Secretary of State Mike Pompeo said those measures were a response to long-established controls on American diplomats in China, drawing an angry rebuke from Beijing.

It comes as part of a Trump administration campaign against alleged Chinese influence operations and espionage activity.

The State Department had said it would also take action to help ensure all Chinese embassy and consular social media accounts were “properly identified”.

The Ministry of Foreign Affairs said on Friday Washington’s “multiple rounds of restrictions” on its diplomatic personnel had disrupted relations between the two countries.

The US has been taking steps to restrict Chinese activity in the country in the run-up to the November presidential election, in which President Donald Trump faces a strong challenge from Democratic challenger Joe Biden and where he has made a tough approach to China a key foreign policy platform.

Relations between the two countries continue to deteriorate amid disputes over trade, Taiwan, Tibet, human rights, Hong Kong and the coronavirus pandemic.

Trump has blamed China for failing to adequately respond to the COVID-19 outbreak, which was first reported in the Chinese city of Wuhan late last year.

Despite Trump’s previous affinity for Chinese President Xi Jinping, his administration has been ratcheting up restrictions and sanctions on Chinese officials, government agencies and companies since last year, beginning with travel limits imposed on diplomats, and registration requirements for Chinese media outlets.

In June, the US ordered China to close its consulate in Houston, Texas, which prompted Beijing to force the closure of the US consulate in Chengdu.