In his conferral speech, the Lamido  of Adamawa, Muhammadu Musdafa Barkindo 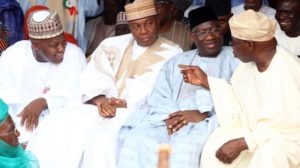 commended the former VP, saying he was giving him the 2nd most important position in the Adamawa Emirate Council in recognition of his contributions to the development of the Emirate, Adamawa State, and the country as a whole.

According to him, Atiku has established the American University of Nigeria (AUN), Adama Plast, Faro water and juice, Gotel Communication and other companies as some of the landmark which has endeared him to the people.

Speaking at the occasion,  President Muhammadu Buhari congratulated Atiku over his coronation.

Buhari, who was represented by the Minister of the Federal Capital Territory (FCT), Mohammed Bello,  wished the founder of AUN a very successful coronation as Waziri Adamawa.

In his good will message, former President Olusegun Obasanjo said Atiku deserved the honour, adding that the new Waziri will take his added responsibility with dignity.

In  his acceptance and appreciation speech,  Atiku Abubakar said he was thankful to God and man to have risen from a humble background to great heights.

“I give my gratitude to the almighty Allah for the opportunity and honour he has bestowed on me from the humblest background to the very venerable position of Waziri Adamawa, Allah has been so kind and generous to me as only he can be, i also thank my beloved country for the education and opportunities it has given me to rise above my circumstances.”, he prayed.

He said he accepted the noble traditional title with gratitude and that he would serve the office with all his might.

The PDP presidential candidate pledged to give unreserved support and loyalty to the Emirate Council and also carry every body along in the discharge of his responsibilities.

Report has it that the occasion which took place at the Lamido of Adamawa Palace in the ancient city of Yola  had in attendance, former Presidents Olusegun Obasanjo and Goodluck Jonathan as well as Senate President, Bukola Saraki and House of Representatives Speaker, Yakubu Dogara.

Others are former Vice President Namadi Sambo, Governors of Taraba, Sokoto, Gombe, many former and serving Senators among others.