During the visit, Akeredolu, who is Chairperson of the At Risk Children Project (ARC-P) and mother of all youths in the state, flagged off the project for the care of at risk children. 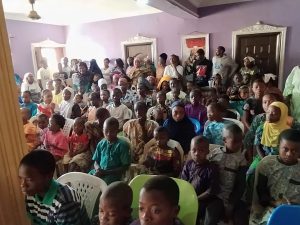 Children of Isolo Town at the Palace of Osolo during the flag off of the AT RISK CHILDREN PROJECT on Wednesday January 18, 2023.

Represented by Special Adviser to the Governor on Gender, Mrs Olamide Falana, the Wife of the Governor, praised the Osolo for his effort to uplift his people since he was presented his Staff of Office and Instrument of Appointment on Thursday December 15, 2022 by her husband.

Speaking at the event, the state’s First Lady represented by the Special Assistance to Governor Akeredolu on Gender, Mrs Olamide Falana, explained that the programme was meant for vulnerable children in the society.

She further explained that, Mrs Akeredolu, who noted that programme is a national programme, says the aim of the ARC-PROJECT, a World Bank project, is to assist the children who had dropped out to go back to school, train those on the street for them to become better individuals in the future.

Arabinrin Betty Akeredolu warned that the programme should strictly be for vulnerable children whose parents cannot cater for them and, therefore, should not be diverted.

Responding, His Royal Highness, Osolo Adewole lauded the programme noting that “if such had been in place, poverty would have declined drastically.”

The Isolo monarch appreciated the Wife of the Governor for considering his town for the flag off of the programme and, thereafter, promised his total support for the programme to succeed in effort to rid the society of vices such as thuggery, hooliganism, robbery, kidnapping, prostitution and among others.

The monarch then ordered his Palace Hall be released at anytime for training in the course of the programme.

Osalade II in closing his remark appeals to her Excellency to consider the youth in his town in the engagement of enumerators and facilitators as there are many unemployed graduates in Isolo town.

Asides the Osolo and the First Lady represented in attendance were members of the Isolo Council of Chiefs, representatives of ARC-P from Abuja led by Mr Idowu Aremu, political office holders and many other dignitaries.

This was contained in a statement issued by Comrade Ayomide Micheal, Special Assistant to the Osolo on Media and Administration.