One hundred and thirty Police Officers were promoted to their next rank.

A statement issued on Friday by the Police Public Relations Officer, Delta State Command, DSP Bright Edafe, and made available to The Defender said “It was all smiles as the Delta State Commissioner of Police, CP Ari Muhammed Ali, decorated the newly promoted officers of the Command. 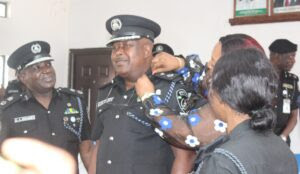 “The Officers decorated were part of those who benefited from the recently released promotion by the Inspector General of Police, IGP Usman Alkali Baba. A total of one hundred and thirty officers were promoted to their next rank. 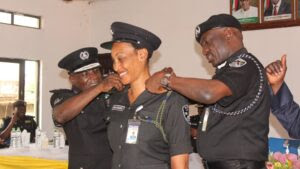 “Other officers decorated include DSP Achem Collins Arrey, DSP Princewell Eke, DSP Akanya Agboga all of which were ASP’s prior to their promotions, the 2/IC PPRO, ASP Edna Bassey was promoted from the rank of ASP II to ASP I.”

The statement disclosed that the CP was assisted by members of his management team for the decoration.

The CP noted that the promotion is part of the IGP’s way of motivating officers and men of the force.

According to him, the reward for hard work is more work, hence “they should beware that, as their ranks has increased, it comes with increased responsibility.”

The CP, in the statement, also thanked IGP Usman Alkali Baba, for finding his officers worthy of the promotion and urged them “to be hard working because to whom much is given, much is expected.”

One of the promotees, ACP Okon Martha Edet, speaking on behalf of officers promoted, thanked the IGP for finding them worthy of the promotions and also assured the IGP and the CP that “they will not disappoint and that they will brace up to the new challenges that comes with the new ranks.